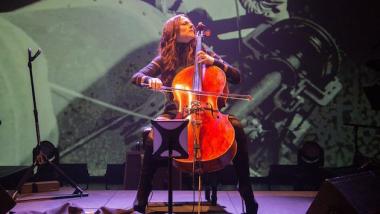 Composers Evan Ziporyn and Jamshied Sharifi have done something herculean in creating an orchestral arrangement of David Bowie’s masterpiece Blackstar. On Wednesday night at the Bing Concert Hall at Stanford, Ziporyn conducted the work with cellist Maya Beiser taking on Bowie’s vocal lines accompanied by the Ambient Orchestra featuring faculty and students from the Boston Conservatory at Berklee.

Bowie’s 2016 album was released just days before he passed away. It features the sounds of a small jazz ensemble, electronics, masterful overdubbing and mixing, and, most stunningly, Bowie’s vocals and overwhelmingly gripping lyrics. What happens when you transform such a thing into a cello concerto?

It is unfair to expect fidelity to the recording from an orchestral arrangement. But Ziporyn wants it both ways, two sources of prestige: room to adapt to the high-art-associated musical forces at hand and the aesthetic tether to the original work. So, the conductor prefaced the performance with the remark that this is Bowie’s “narrative, his journey” but also wrote that they never “imitate or replicate his original ‘sound and vision.’” For me, the very process of arranging means it is no longer only Bowie’s narrative and journey, it necessarily takes on more, it is an augmenting, and that can be good.

Indeed, the most successful moments were the most musically distant from the original album. At the start of “Sue,” a percussionist elicited billows of sound from a gong while Beiser improvised an exciting cacophony of noises via extended techniques. There is no such moment in the album but it was a thrilling one: miked, controlled sound chaos transporting the listener from one song to the next. And again at the end of “I Can’t Give Everything Away,” the full-throated accompaniment of the orchestra behind the guitar-distorting sonorities of Beiser was revelatory and distinct from my experience of the album.

But orbiting such an iconic album and artist, the losses were palpable from the start. The lyrics are entirely wiped away, with a few choice lines printed in the program. The smooth flexibility of the album’s small ensemble and Bowie’s entrancing rubato are locked into a notated score. Necessarily lost were all the sounds Bowie made that were picked up in the recording, most audibly the piercing, tired breathing at the start of “’Tis a Pity She Was a Whore.” The album’s lyrics, ensemble, and Bowie-specific sounds and timbres are the pulsing heart of the work. While the performers, including Beiser, were unstoppable, the musical transformation from album to concerto meant shrouding an aesthetically anemic version of Bowie’s music in the Western high-art-music virtuosity of the 19th century.

Some extra-musical artistic choices were also unsavory to me. When listening to the album, the sounds coming from the speakers were not physically occurring in the same physical space, but carefully recorded and mixed in the studio. In Bing, the demands of live performance often led to an unbalanced sound in the audience. During the opening melodic lines of “Lazarus,” where Bowie’s lyrics are, “Look up here, I’m in heaven,” the lighting designers decided to have a cliche beam of divine white light shine down on Beiser. And Beiser’s calculated gestures (arm raising, cello tapping, head dropping), were, for me, an unconvincing and unnecessary addition to her great playing.

If you have an hour to spend on entertainment and the option of seeing this performance or listening, perhaps again, to Bowie’s album, I recommend delving deeply into Bowie’s work. If you are a Bowie superfan and need another hit, another perspective, another encounter now that he’s left us, then go to the performance. The audience clearly enjoyed it, and demanded four encores, eager for more.

Cellist Maya Beiser Gets the Led Out

“Cello goddess” Maya Beiser, prepping for a gig at Yoshi’s, uncovers and exploits new ways of pulling sound from her instrument, whatever the genre being played.

Maya Beiser, a collaborative artist/cellist/innovator, believes strongly that music can open minds and even change lives, and works toward that end in her many ventures moving from classical to creating something new.