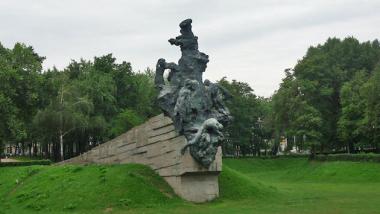 Sometimes we learn from the past. But learning happens only when we countenance even history’s darkest truths. It’s true for us as it was for Dmitri Shostakovich’s Soviet Union. In a program called “Remembrance” on Thursday evening at UC Berkeley’s Zellerbach Hall, the Berkeley Symphony commemorated the 75th anniversary of the composer’s momentous “Babi Yar” Symphony (No. 13). The performance proved his work, about one horror of the Holocaust, still resonates in our present time.

Babi Yar (Grandmother’s Ravine) is located on the outskirts of Kiev. When the German Army captured the city in 1941, resident Jews were commanded to pack up their things and head for this place.

They were stripped, shot, and shoved to their deaths.

It is estimated that over 30,000 people were murdered in the first few days, and closer to 100,000 ultimately died. Whatever the true number, Babi Yar became the site of one of the largest mass killings of World War II.

Twenty years later, the poet Yevgeny Yevtushenko was appalled upon visiting and learning Babi Yar lacked as much as a tombstone or physical memorial. Despite appreciable risks, he recorded what happened in vernacular verse. Shostakovich, in turn, felt compelled to set Yevtushenko’s poem to music. But Shostakovich didn’t stop there: he also set four additional texts by the same poet, which Yevtushenko himself had never considered juxtaposing.

These other movements transform the five-movement choral symphony into more than a musical memorial. Broader themes include the irrepressible irreverence of humor, the strength of women, and the power of both moral courage and art to preserve truth.

Since the texts are crucial, Thursday’s performance began with a reading of all five poems by four actors situated on the stage and in balcony boxes. Joy Carlin directed the dramatic rendition, which was the first after Yevtushenko’s death, in April of this year.  House lights were illuminated for the symphony, to enable simultaneous reading and listening.

The collaboration between German guest conductor Christian Reif and Russian bass soloist Denis Sedov was musically productive and symbolically significant. Reif began the symphony without waiting for applause after the texts’ narrations. Listening to Sedov sing feels like falling into friendly quicksand: It is warm, deep, and all-enveloping. Focusing on the sheer sound of his voice can cause one to lose sight of broader circumstances.

The first movement is in sonata form and in the traditionally “dark” key of Bb minor. Perhaps representing the inescapable fate of the victims, the two main themes are inversions of one another. Lugubrious and slow, this opening introduced the work’s thick orchestration — solo voice, huge orchestra, and men’s chorus — that helped to convey the scope of the catastrophe. Under the leadership of Marika Kuzma, the Bay Area Men’s Chorus subsumed singers from multiple local choral ensembles.

The second movement — “Humor” and the first of two Scherzos — is known for quoting Shostakovich’s own setting of “MacPherson’s Farewell,” which tells of dervishly dancing under a gallows tree. The second Scherzo (the fourth movement) begins seamlessly from the third, because the final three movements are played without pause.

The third movement was a highlight of the performance. It begins with a theme in the low strings that lingered for the rest of the work. The movement is an ode to the quiet suffering and unflappable endurance of Russian women. The (usually unison) chorus broke into harmony for a chill-inducing “Amen” cadence at this movement’s end.

At the start of the final movement, the flutes transformed the low string motif from previous movements into something chirpier and cheerier. The finale was faster than I was expecting, but still idyllic. The text is about historical figures, such as Galileo, securing legacies by sacrificing careers/lives to speak the truth.

This performance related hard truth, featured a chorus of men exulting women, and ultimately felt affirmative. By contrast, some present-day leaders normalize rank misogyny, baldly embrace alterative facts, and commonly discourage faith in the audacity of hope. But “Remembrance” did more than remind of a massacre. It demonstrated that, as long as we still make art, truth, humor, and hope do indeed trump darkness, deceit, and despair.