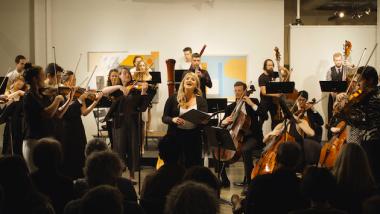 For adults, inspiration tends to be fickle. It can strike at the strangest of times, and remain stubbornly elusive when you need it the most. But whereas adults carry the burden of knowledge, children look at the world with naive astonishment, which seems to invite inspiration to linger longer. And on Friday, Feb. 21, at Heron Arts, One Found Sound programmed three diverse works — by Caroline Shaw, Samuel Barber, and Maurice Ravel — that all tapped into a childlike sense of wonder.

The second string quartet in Haydn’s Op. 77 is the last quartet that he completed. Around the time he wrote it, Haydn told his publisher there was still so much music to create. He also said that nobody would believe how laborious it was for him to compose. But since inspiration moves in mysterious ways, from Haydn’s effort came Shaw’s initial inspiration for Entr’acte. Specifically, Shaw was intrigued by the transition to the trio, meaning the middle section of the minuet in Haydn’s quartet. She describes the moment as “absurd, subtle, technicolor” music that “takes you to the other side of Alice’s looking glass.”

Shaw originally wrote Entr’acte as a string quartet, but One Found Sound played a version for string orchestra. This 10-minute work opens with short, gently swelling, balanced phrases. A pizzicato section ensued; it sounded like a playful skeleton of what had come before. The musicians then deliberately distorted the initial thematic material in other ways. At the end, for example, cellist Natalie Raney played an unbowed, arpeggiated version. One Found Sound is conductorless, and especially with all the coordinated plucking followed by pauses of varying lengths in this magnificently unpredictable piece, performing it without a conductor was brave.

The American writer James Agee claimed to have written his poetic essay “Knoxville: Summer, 1915” in a fit of inspiration, finishing the whole thing in only 90 minutes. It’s largely about the author remembering spending a summer’s day with his family as a boy. But Agee’s father died in the summer of 1916, and Agee used the piece as an introduction to his autobiographical novel, A Death in the Family. Especially in Barber’s setting, in certain lines — such as the last one about sleep never telling the boy who he is —nostalgia spirals into something darker.

As hornist Patrick Jankowski explained, the undertones of existential questioning resonated with Barber, who grappled with his own homosexuality, among other things. Barber’s setting is for orchestra and soprano. On Friday, Julie Adams joined the chamber orchestra. The dramatic emotions in her voice frequently fill entire opera halls, and the small Heron Arts space made this performance simultaneously more intense and more intimate. Additionally, witnessing the ensemble’s gratitude toward Adams and her humility in return was heartwarming.

Before breaking for intermission, musicians encouraged the audience to visit the open bar, and music fit for a bar started gently thumping. Factors such as these — combined with the approachability of One Found Sound’s musicians — help to explain why this performance was sold out, and to a younger crowd than is typical for the industry.

After the break, the orchestra performed Ravel’s Mother Goose Suite. Ravel is well-known for having liked children — in fact, he initially wrote this work to be performed by two children on piano — and this whimsical, dance-like suite is based on five fairy tales. The fourth movement, for example, relates “Beauty and the Beast,” and I was surprised to see that even the snarling bassoons were performing standing up. At the end, cellist James Jaffe ensured that Kashi Elliott, who played first violin for this number, received a well-deserved shout-out for her solo work, after which the orchestra ensured that multiple colleagues who had solos or prominent parts received the same.

Underpinning this well-performed concert was its creative programming: Unified conceptually with the notion of “wonder,” concatenating these three dissimilar works made sense. After the concert, a woman behind me said she could feel positive energy in the room. Indeed, I also left feeling inspired — and, in a word, wondering — how long that fleeting feeling would choose to stay.

Julie Adams is terrific as Mimi, and a relaxed, modern setting sets the stage for great singing and playing throughout.