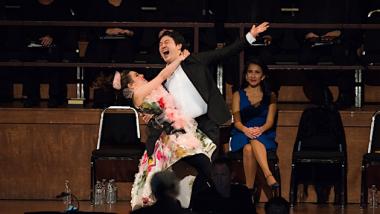 A frolicking Broadway operetta that props up “the best of all possible worlds” and then cheerfully and systematically assaults the notion, Leonard Bernstein’s Candide has always been a thorny proposition. It’s both light and heavy going.

Revised and re-revised through multiple versions, with no fewer than six lyricists enlisted along the way to help musicalize Voltaire’s 1759 novella (on a libretto by Hugh Wheeler), the piece simultaneously delights and defies realization onstage. The globe-spanning action moves so quickly, with Bernstein shuffling his musical deck from chorale to polka, torch song to the bel canto fireworks of “Glitter and Be Gay,” that velocity and variety can dominate to a fault.

As part of its season-long Bernstein centennial programming, the San Francisco Symphony undertook a concert version of Candide devised by the Scottish Opera in 1988. At a little over two hours, including an intermission, the piece did hurtle along through the hero’s wildly improbably adventures, which feature wars, an earthquake, a star-crossed love affair, the Spanish Inquisition, and an odd preoccupation with sheep. A lively spoken-voice narrator (baritone Michael Todd Simpson), who doubled in the singing role of the avuncular Dr. Pangloss, helped smooth out the narrative joyride. He also added a few contemporary japes — about Fresno and political correctness.

Two great and glorious compositions bookend the work. With Michael Tilson Thomas on the podium, the substantial but tightly wrought overture got an infectious reading. The woodwinds chirped and scolded. The brasses mocked one another and the rest of the band. The strings turned from their own giddy capering to a silky middle section, then bolted off again to the finish line. Even one bumbled passage on opening night seemed to add a festively antic flourish.

Candide ends with one of the most expansive and moving final numbers in Broadway history. Rising from the poignant reconciliation of the eponymous hero (the ingratiating tenor Andrew Stenson) and his beloved Cunegonde (soprano Meghan Picerno, becalmed after a deliriously antic night), “Make Our Garden Grow” becomes a gleaming, harmonically rich choral coda that deepens the resonance of all that’s come before. The San Francisco Symphony Chorus, who sounded gorgeous all night, brought a particularly deep shine to the work’s climax.

Before they got there, the chorus got in on some of the evening’s erratic hijinks. Sporting assorted hats, gossiping with Cunegonde, or donning a judge’s white wig, the singers played along as the story’s young “innocents” careened through their adventures. Along with the two lovers, Dr. Pangloss’s tutees included baritone Hadleigh Adams (in a vocally and comically assured turn as Maximilian) and a sweet-voiced soprano Vanessa Becerra as Paquette. Local favorite Sheri Greenawald, who first sang with the San Francisco Symphony in 1979 and currently heads San Francisco Opera’s Merola program for young singers, chipped in a comically and extravagant performance as The Old Lady.

Stenson came off a bit pallid in the early going, with some holes in his voice that never filled entirely. Nonetheless, he sang with wit and charm and a resourceful ability to register emotion equally. Blithely oblivious in his “Oh, Happy We” duet with Picerno, he was instantly, persuasively desolate in “Candide’s Lament,” his voice hushed to a stricken pianissimo, and wrenching in “It Must Be Me.”

The cutting and pasting of the full score left some seams in the concert version. But some of Bernstein’s masterstrokes, like the inspired recklessness of “Auto-da-fé (What a Day)” got full corrosive measure. Picerno and Greenawald turned “We Are Women” into a curdled feast of femininity, which played as a kind of grotesque gloss on the #MeToo movement. Good art keeps regaining new currency.

Theatrical effects were minimal. The soloists, seated on a raised platform between the downstage orchestra and loge-seated chorus, stepped forward from a row of chairs to perform their solos and ensemble numbers. Picerno had the widest berth, especially in her borderline-hysterical account of “Glitter.” She embellished the famous set piece not only with swooping coloratura decoration but an assortment of squawks, yelps, and belted high notes that made a listener half-fear for Cunegonde’s sanity. It was both funny and alarming.

As the action of Candide leaped over to the New World and back to Venice in Act II, with shipwrecks and those sheep piling up, a listener was ready to wave the surrender flag. Enough events, enough tragedy, enough zany coincidences and loony plot twists. That’s when Bernstein tipped the barrel over one more time to pour out the liquid gold of the final scene. Stenson and Picerno were touching when they finally stopped spinning and took each other in as real, flawed, grounded lovers for the first time. From that raw earth of reality “Make Our Garden Grow” blossomed.

The orchestra prepares to take on one of Bernstein’s most brilliant scores.

The Lamplighters Musical Theater production of Candide has a lot going for it, along with a few unavoidable flaws.

The symphony closes out the season with Leonard Bernstein’s comic operetta.