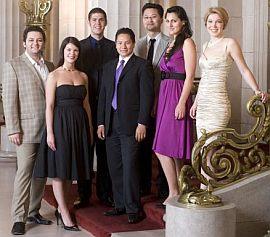 Betting on My Friend Fritz

Georgia Rowe on July 27, 2009
L’amico Fritz is one of opera’s neglected gems. As the follow-up to his hugely acclaimed Cavalleria rusticana, Pietro Mascagni’s 1891 commedia lirica never quite achieved the popularity of its predecessor. These days, with arts funding at a new low, productions of it are as rare as hen’s teeth. Yet the Merola Opera Program’s revival, presented over the weekend at the Fort Mason Center’s Cowell Theater, suggested that Fritz is well worth revisiting.

Odds are that a sizable percentage of Friday’s opening night audience (and those who caught the single repeat on Sunday afternoon) had never seen the work onstage — the San Francisco Opera last gave Fritz a main stage production in 1924, and it was staged again as part of the company’s Spring Opera in 1976. Even for aficionados, though, this production, imaginatively staged by Nic Muni, fervently conducted by Warren Jones, and handsomely cast with young singers from the current crop of Merola artists, was an unmitigated treat.

Muni’s production highlighted the class disparities at the heart of the story about a wealthy Alsace landowner who bets against love and loses, winning a bride in the process. The director’s diagonally bisected unit set, with the well-appointed dining room of Fritz’s house on one side, and the plot of land (with its all-important cherry tree) worked by Suzel and her father on the other, effectively suggested this small French-Jewish community in the wake of World War I. The indoor–outdoor design also allowed the characters to move quickly between scenes, while deftly delineating the differences between rich and poor, artifice and nature, idleness and industry.

Fritz Kobus’ wealth is matched only by his benevolence, and the opera begins on his birthday, with his friends, neighbors, and servants gathering to celebrate. In the ensuing bonhomie, Fritz and his closest friend, the Rabbi David, turn to the subject of marriage. Fritz is a confirmed bachelor, but David assures him he’ll soon wed; when David suggests a wager on it, Fritz accepts, promising to give David his vineyard if he ever takes a bride. (It’s a season of bets for the Merola Program, which will return to the Cowell Aug. 7 and 9 with Mozart's Cosi fan tutte.)

Of course, the future bride is in close proximity all along: She’s Suzel, the daughter of Fritz’s tenant farmer. As for the wager, Fritz is honor-bound to cede the vineyard to David — who promptly gives it to Suzel as a wedding present.

It’s All About the Music

If the libretto (by Nicola Daspuro and Giovanni Targioni-Tozzetti, based on the novel L’ami Fritz by Emile Erckmann and Alexandre Chatrian) occasionally strains credulity, the score is a marvel: lithe and charming in the instrumental interludes, passionate in the vocal writing that advances the growing love between the principals. The Act 2 “cherry duet” (“Suzel, buon di”), an extended scene for Fritz and Suzel, offers thrilling evidence of Mascagni’s strength as a melodist, and by the time the couple fall into each other’s arms in Act 3, the composer has given them a “big sing” worthy of their passion.

At Friday’s opening, Jones conducted with absolute conviction, and the opera’s manifold beauties emerged in rich relief. The conductor struggled a bit with balances in Act 1, and the brass section sounded as if it could have used another rehearsal or two. For the most part, though, the orchestra produced well-defined, shapely sound, and the individual parts — including the affecting violin solo in the first act (played with tenderness by Robert Galbraith) — were delivered with flair.