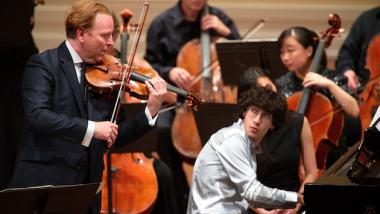 The unusually peaceful and relatively prosperous 1890s were called fin de siècle (end of the century), La Belle Époque (The Beautiful Era), or the Gilded Age. Whatever you may call the period, it produced an unprecedented, frequently pathbreaking torrent of music, art, and literature.

Daniel Hope and the New Century Chamber Orchestra opened NCCO’s 2019–2020 season this weekend with “Fin de siècle,” a wondrous program of miniature masterpieces from the era, plus one major, rarely performed concerto, Ernest Chausson’s 1891 Concerto for Violin, Piano, and Strings — a stunner.

Held spellbound in Herbst Theatre Saturday, a large audience listened to and applauded a veritable surfeit of the most gorgeous, ultraromantic music you can imagine, fabulously played by the orchestra, which is in midseason form even at the get-go.

Hope, whose violin solos and illuminating narration were at the heart of the event, programmed the concert with emphasis on lyrical, rather the experimental/pioneering, aspects of the period.

Without mentioning the Brexit chaos by name, Hope joked that he wants to bring something good from the U.K. for a change, and he made a convincing case for Edward Elgar, in words and with music. Elgar’s 1905 Introduction and Allegro, Op. 47, opened the first half and his 1900 Chansons de Matin (Morning Songs) closed it.

A variation of the baroque concerto grosso, the Elgar Introduction and Allegro has the unusual structure of a string quartet playing “against” the chamber orchestra. The music is dynamic, rich, surprising, with surging waves, layers of sound, all in the lyrical, melodic modes that characterized the first hour of the concert.

Arnold Schoenberg’s gorgeous 1896 Notturno for Strings and Harp, which presaged the extreme romanticism of Transfigured Night and Gurrelieder, seems to have packed the essence of Tristan and Isolde into a few minutes. As the composer’s first work performed in public, it gave clear notice of greatness to come. Harpist Meredith Clark’s duet with Hope was memorable.

Emphasizing the agreeable similarity of the tone of the program, Hope then pulled two works together, playing them without pausing for applause: Christian Sinding’s 1888 Suite in the Old Style and the “Méditation” from Massenet’s 1894 opera Thaïs (harpist Clark to the fore again, with Hope).

Sinding is known today almost exclusive by his Frühlingsrauschen (Rustle of Spring), but Hope convincingly demonstrated the Norwegian composer’s excellence with a vibrato-rich performance of the Suite — a work requiring technical virtuosity — that offered  lyrical beauty as well.

Richard Strauss’s 1894 Morgen! (Tomorrow) is often heard performed by a singer — soprano or baritone — but it was written for the violin. The way Hope made his violin sing, nothing was missing from the experience.

The Chausson concerto was new to me and probably to most of the audience: It’s a big, big piece. The performance introduced the amazing pianist, Maxim Lando, 16, to San Francisco. Lando is the already famous protegee of Lang Lang and — incredibly — performed the “infamous” Rachmaninoff Third Piano Concerto with the Mariinsky Orchestra in Saint Petersburg to acclaim at age 14.

The Chausson requires fingers of steel, nonstop playing, and extreme virtuosity — all effortlessly offered by Lando, along with a deep sense of the music.

Lando, Hope, and guest concertmaster Simos Papanas led the way into the whirlwind of the lengthy concerto, which combines power and romanticism, with a tremendous range between the second movement’s subdued lyricism and the finale’s rafter-shaking fortissimi.

NCCO is challenged to maintain the brilliance of this season-opener, and that’s what they plan to do in a very different musical setting, Nov. 7–10 when Simone Dinnerstein leads an all-Bach program, including three keyboard concerti and the Brandenburg Concerto No. 5.