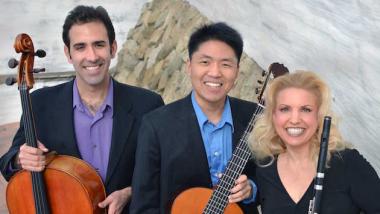 Forging a career as a chamber musician is intrinsically difficult — even more so for an ensemble with uncommon orchestration and for which few works have been written. Despite the challenges, Kris Palmer (flute), Steve Lin (guitar), and Isaac Pastor-Chermak (cello) teamed up in 2013 to create Black Cedar. On Sunday evening at St. Aidan’s Episcopal Church in San Francisco, Music on the Hill and Black Cedar explored uncharted waters with a heterogeneous program ranging from Bach to two newly commissioned works by local composers.

Black Cedar began the program by putting a fresh spin on a piece by a well-known composer, Domenico Scarlatti. Although Scarlatti is best known for single-movement keyboard sonatas, he also wrote multimovement works such as Sunday’s four-movement mandolin sonata. Hearing the colors and textures of this typically solo piece splayed across the unorthodox ensemble felt like watching a kaleidoscope turn unexpectedly: At first the contents were familiar, yet uncannily different or rearranged. But then dust settled, expectations realigned, and everything sounded like second nature.

In addition to arranging existing works, Black Cedar also deals with the dearth of repertoire by commissioning new works. In 2016, the group commissioned Mark Fish, a Bay-Area musician and pedagogue, to write The Devil Inside. Spanning three short movements, the piece pertains to “nefarious things you want to do but cannot risk.” According to the musicians, its impulsive musical outbursts remind listeners of Hitchcock’s The Birds. But the work was hardly violent throughout. The rising glissandi and pitch bends in the second movement, for example, sounded merely mischievous. It gave way to the final movement, where the guitarist often strummed under a cello/flute melody.

That said, Fish’s dark inspiration lingered in the next piece, Klaus Hinrich Stahmer’s Nachtstücke. Black Cedar played the first three movements of this broader cycle. The first two required Palmer to switch to bass flute. Deliberately breathy but with a laser-focused core, her sound both envelops and cuts like a brisk winter’s wind. The musicians noted that Stahmer composes using allusions, a fact to which the title of the third movement attested: “Ça va, monsieur Croche” nods to an alter-ego that Debussy penned. The group has previously recorded another work by Stahmer with a more explicitly allusive title, Debussyana.

The second half’s opening focused on the flutist. Perhaps partly because she specializes in 18th-century music, Palmer plays on a wood flute with a silver mechanism. Her nuanced and thoughtful rendition of Bach’s C-Major Sonata demonstrated this expertise. Supporting her solo line by having both cello and guitar render the continuo thickened the texture slightly, which was especially exquisite in the inner Adagio.

Black Cedar also commissioned the next work by Ursula Kwang-Brown, who is currently a Ph.D. candidate in composition at UC Berkeley. Her Sunrise for Solo Alto Flute uses extended techniques — including key clacks, whistle tones, and harmonics — to convey “the sun rising off the coast of Denmark.” These soft sounds eventually gave way to soulful melodies, such that, to me, the piece sounded a bit like a sun lamenting having to get out of bed. Meanwhile, Palmer wielded her third instrument of the evening as though she practices on all of them every day.

Lin and Pastor-Chermak rejoined Palmer to close with two light-hearted works. The first, a Piazzolla tune, underscored Lin’s dual talents as a guitarist and an arranger. It also gave the lyrical cello an extended moment to shine. And when the flute and cello lines began to dovetail, this originally strange ensemble sounded seamlessly unified, leading me to wonder why more people do not write for this combination. The trio concluded with Rossini’s La Danza Tarantella. While this patter song was perhaps less virtuosic without a vocalist or text, it was whimsical nonetheless.

Sunday’s program proved that the emerging Black Cedar is not only willing but also quite capable of pursuing (to cite the title of their recent recording) A Path Less Trod. Bay-Area audiences will be fortunate for the opportunity to hear live performances as these three musicians pave their own unique road.