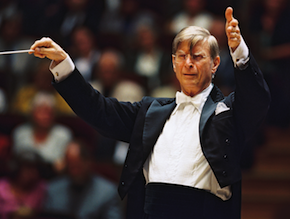 Six decades of conducting have more than earned maestro Herbert Blomstedt the privilege to concentrate on the repertoire he loves the most.

Fortunately, that is the same repertoire that San Francisco audiences most love to hear him conduct, when he is back in town to solidify his position as the Symphony’s Conductor Laureate — as if that was necessary.

After a week of leading the San Francisco Symphony in works by Nielsen and Schubert, Blomstedt’s second week was dedicated to Bruckner’s Symphony No. 4 in E-flat Major ("Romantic") from 1874, and Mozart’s Piano Concerto No. 21 (1785), with pianist and local favorite Garrick Ohlsson as soloist.

The exquisite pairing of Mozart and Bruckner was full of contrasts, meticulously shaped and beautifully framed by Blomstedt, with the orchestra seated the way he prefers: second violins to his right, opposing the first violins.

As he explained in a recent interview on KALW's Open Air: “You get more clarity that way; more of a dialog between first and second violins.”

During that same radio interview, maestro Blomstedt (b. 1927) also mentioned that he fell in love with Bruckner’s music when he heard it for the first time, as a 13-year-old boy. Many years later, the love still shows.

Blomstedt has a reputation of leaving nothing to chance when performing. With his wealth of experience, he has observed, scrutinized, and studied every note and every detail in a score, and where the eminent maestro leads, the orchestra follows his refined insights with inspired confidence.

That doesn’t mean that Blomstedt’s performances are anything but expressive and fresh and mesmerizing ... he summons some of the most expansive musical panoramas that Bruckner composed ... Crazy, yet completely logical.

But that doesn’t mean that Blomstedt’s performances are anything but expressive and fresh and mesmerizing. With calm gestures, his left shoulder slightly raised, he summons some of the most expansive musical panoramas that Bruckner composed, offering an entirely new horizon with the change of just one note and making full use of the opposing musical statements in the "Romantic": One moment a single oboe or a pair of flutes gently carry the music forward, and a few bars later the entire orchestra erupts into one big controlled fortissimo climax. Crazy, yet completely logical.

Before intermission, Mozart’s piano concerto No. 21 in C Major, K. 467 brought musical eloquence, color and beauty on a much smaller scale. It may be slightly unfortunate that this concerto is likely to be associated with the 1967 Swedish film Elvira Madigan for a few more generations, but the music itself (and especially the famous, haunting Andante) is of such unbelievable and eternal beauty that it will certainly outlive its anachronistic nickname.

Garrick Ohlsson shows great respect for Blomstedt’s mastery and the comfortable interaction between maestro and soloist stems from a close musical relationship that dates back more than 30 years. It is obvious that Blomstedt and Ohlsson get along so well, musically speaking.

In his approach to Mozart’s masterpiece, Ohlsson doesn’t try to take any form of artistic control over the composer’s thoughts and inventions; he plays the music, but not with the music. His emotional involvement allows the score to speak with its own wonderful means and he steers clear of sounding too detached, but I think that Mozart would be happy to allow a little more ‘Ohlsson.’