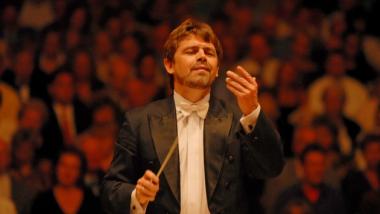 Guest conductor Andrey Boreyko brought along a large and unusual work to the San Francisco Symphony’s concerts at Davies this week: Die Seejungfrau by Alexander Zemlinsky. I heard Sunday’s performance.

Die Seejungfrau has an unusual history. Having heard the latest Richard Strauss, Ein Heldenleben, conducted by the composer in Vienna, Zemlinsky determined to create an equally grandiloquent tone poem of his own. Possibly he settled on his program, “The Little Mermaid” by Hans Christian Andersen — a fairy tale of a lover who fails to secure her intended — in response to losing his own intended, Alma Schindler, to the greater charms of Gustav Mahler. At any rate nobody discusses the music without mentioning this.

After completing the work in 1903, Zemlinsky performed it around Europe, but then withdrew it for unexplained reasons. After his death, the score became divided. The section that was available for viewing by scholars bore no title and was thought to be from an otherwise unknown symphony. It wasn’t until the 1980s that the chunks were put together and identified, and since then this addition to the late-Romantic repertoire has been often performed.

James M. Keller’s program notes say that identifying the program in the music would be speculative, but in fact much is clear and obvious from comparing the music with Andersen’s tale, which Zemlinsky follows closely. It would take a dull mind not to identify the storm that sinks the prince’s ship, or the moment that the mermaid throws away the knife (“What knife?” say those who’ve only seen the Disney movie).

Zemlinsky is a talented orchestrator. The opening, depicting the underwater kingdom, uses the deepest instruments in the orchestra — bassoons, low strings, low brass, low harp strings, and timpani — in a slow scale crawling upward. Muted violins then add a high shimmer, followed by flickering motives from the winds like fish darting around. It’s a brilliant evocation of a dark and eerie scene.

Unfortunately, as with many other works of this kind — Strauss’s Also Sprach Zarathustra comes to mind — the imagination of the arresting opening is not matched by what follows. This is where Boreyko’s conducting saved the day. He imposed strict discipline on Zemlinsky’s indulgences. He had the orchestra give bold, firm intensity to the syrupy harmonies behind the frequent appearances of the mermaid motif for solo violin (Concertmaster Alexander Barantschik, sturdy and straightforward as usual). He tempered the chaos in the bold Wagnerian climaxes. He kept the frequent changes of mood on a continuous track, not shifting gears abruptly.

The 45 minutes of this performance thus passed with gratifying engagement. Still, it wasn’t a match for about the same amount of time spent listening to the renowned Emanuel Ax playing Brahms’s Second Piano Concerto, which formed the other half of the concert.

This is the relaxed, genial, and friendly Brahms piano concerto, and it certainly felt that way in this rendition, despite the fact that Boreyko brought the same brisk emphasis to his conducting as he did to Zemlinsky. Meanwhile, Ax — though he led with vigor when called for, as in much of the scherzo — usually essayed tone colors that ran from the gentle to the vanishingly airy. In one passage in the Andante where the orchestra is supposed to merely provide a steady platform for the piano to perform over, that platform was loud and substantial while Ax offered the most fleeting and delicate musings. One phrase in the scherzo, of chords in octaves for the piano, gave a strikingly warm and toasty feeling, like sitting around the fire on a winter’s evening.

As far as Ax was concerned, the Andante is a double concerto for piano and cello. Associate Principal Cellist Peter Wyrick played his solos with warm vibrancy. At the end of the work, not only did Ax insist on taking double bows with Wyrick, but for an encore the two played a cello and piano arrangement of Brahms’s song “Immer leiser wird mein Schlummer,” Op. 105, No. 2, whose melody is adapted from the cello’s solo theme in the concerto.

A Gripping St. John Passion From S.F. Symphony Chorus and Voices of Music

With the final bows of Michael Tilson Thomas as music director, the orchestra gives clues to its future and sends its current director off in style.