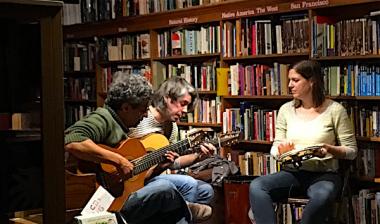 Brazil in the Bookstacks With Duo Violão Plus One

Long before the emergence of bossa nova and samba, choro took shape in 19th-century Rio de Janeiro as the first truly Brazilian musical style, a confluence of popular European dance music like the polka and waltz with African rhythms, particularly habanera (via Cuba) and Angolan lundu.

Bringing together Brazilian guitarists Rogério Souza and Edinho Gerber with San Francisco percussionist Ami Molinelli, Duo Violão Plus One traces the music’s evolution over the past 150 years on the new album A História do Choro (Amimo Productions). The trio celebrated the release of the CD Saturday night at Bird & Beckett Books and Records, one of the first in a series of gigs and workshops around the region in the coming weeks.

Presented by the fair-pay-for-players organization Jazz in the Neighborhood, the Bird & Beckett performance was both gently enthralling and decidedly informative, gracefully illustrating the instrumental style’s unusual knack for reinventing itself. Rather than sticking to the album’s chronology, DV+1 opened with Baden Powell’s “Deixa,” a standard by the great Brazilian guitarist and composer who drew inspiration from choro in the 1950s and ’60s.

Molinelli has been an essential part of the Bay Area’s Brazilian music scene for more than a decade, performing widely as a co-founder of Grupo Falso Baiano, one of several excellent Bay Area choro ensembles. With both Souza and Gerber on seven-string guitars, they traded lead and rhythm roles and both supplied supple bass lines, while Molinelli spent most of the night on the tambourine-like pandeiro.

The instrumentation is one of the reasons why the trio brings such a fresh perspective to the music, as traditional choro ensembles typically feature flute, guitar, bandolim (mandolin), and the diminutive, ukulele-like cavaquinho.

On proto choros like Henrique Alves de Mesquita’s “Ali Babá,” a tango-habanera from 1872 (16 years before the end of slavery in Brazil), the group rendered the tune with respect and not a drop of sentimentality. With the propulsive groove in the foreground, it was easy to hear the connection between the 19th century and the modern era ushered in by the ingenious Afro-Brazilian flutist and composer Pixinguinha with tunes like “To Fraco” and “Lamentos.”

Over the decades, choro has undergone numerous revivals, with a rising generation of musicians bringing new virtuosity and ideas into the style every generation of so. In the 1940s, the incandescent innovator was bandolim maestro Jacob do Bandolim, and while the trio didn’t dwell on his choro standards, they played his hard-driving “Remelexo” with precision and panache.

In the 1980s, Duo Violão’s Souza was one of the creative catalysts behind the rise of choro novo, a movement deeply informed by jazz and other musical currents. His lovely original “Choro em Niterói,” co-written with his nephew Tiago Souza, brought the story to the present. It’s a tale that makes for compelling listening on its own, but choro also provides a fascinating Southern hemisphere mirror to similar but fragmented styles indigenous to the United States, particularly ragtime, bluegrass, and jazz.

Luciana Souza Takes a Page From the Book of Longing

The vaunted singer talks about her return to S.F. Performances with a program exploring the intersection of jazz and poetry.