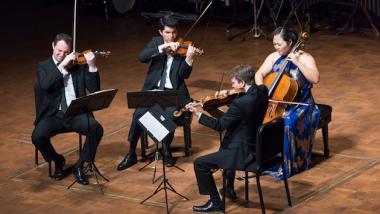 Calidore String Quartet Keeps Everything on the Edge

The San José Chamber Music Society, one of the many occupants of the Trianon Theatre that have had to relocate now that the owners have closed that venue to concerts, has found its way onto the San José State University campus. Its new venue is the concert hall in the campus music building. This is a larger and more cavernous room than the Trianon, but, with a broad acoustic shell on the even broader, and deep, stage, the sound came through fairly well in the season’s opening concert on Sunday.

The performing ensemble was the Calidore String Quartet, a local favorite from its appearances at [email protected], marking its first gig in San José. In typically effortless-sounding Calidore style, the performers romped enthusiastically through one of the largest and most heavyweight of all quartets, Beethoven’s Op. 130 in B-flat Major, with the original Grosse Fuge finale.

They gave light charm to an emphatic condensation of the scale of the Allegro opening movement, dampening the impact of the Adagio interjections, and they played the Andante third movement with such light and speedy tunefulness that it became a dancelike interlude matching the Scherzo and Danza tedesca that surround it.

However, the entire quartet can’t be disposed of this way. The Cavatina movement remains a graceful Adagio, here played with a lovely intertwining of lines, as Ryan Meehan’s second violin rose lightly above the heavier texture of Jeffrey Myers’s first violin.

The Grosse Fuge did not appear, at the beginning, as if it was going to be anything other than the monumental rough block that’s typically performed. The Calidore players turned to the heavy grinding sound typically heard for the jagged fugal subjects. The contrasting middle section, however, was unusually gentle and even quiet, pulling the tension of the work down to a low-grade patter. Then, as the main fugue returns, the players briefly acted as if they’d forgotten what it was supposed to sound like, lightening up into joviality for a moment before returning to the heavier style of the opening.

Then, as if to confirm that there ought to be something light and fun about a fugue, they played as an encore the fugue of that kind that concludes Haydn’s Op. 20, No. 2, in C Major.

The rest of Sunday’s program carried both contrasts to and similarities with the Beethoven. Three Essays by Caroline Shaw, written for the Calidore and completed last year, form a substantive work about 20 minutes in length. The composition bears a certain formal resemblance to Op. 130 in placing highly contrasting material in close juxtaposition without making it seem fragmented or random. Shaw, like Beethoven, has a larger plan in mind.

A catalogue of all the conflicting rhythms, disintegrations and reintegrations, sudden appearances of pizzicato or harmonics, toneless scratching resolving into solemn chords, shimmering pulses, metallic galloping, and other features that Shaw presents within a general atmosphere of warm consonance would take as long to read as the music does to play, and it would not convey the sparkling imagination with which the work was written, or the deep coherence with which it was performed.

In that context, the Calidore’s performance of Ravel’s Quartet in F Major was surprising and offbeat. This is a highly mutable work, congenial to being played with the blazing airiness of Calidore’s Beethoven or the high adventurousness of its Shaw. Instead, this performance was slow and cautious, with a light iciness to the opening and a sure-footed heaviness to the Scherzo’s pizzicato. This was more of a neoclassical than an impressionistic Ravel. Only the finale took off with a shimmering drive and intensity. Startling listeners with something they weren’t expecting seems to be part of the Calidore style.

Nakamatsu Steps In With Escher Quartet

Piano quartets by Mozart and Brahms had pride of place at the San José Chamber Music Society concert.