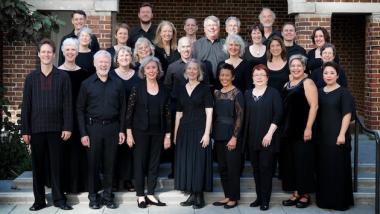 Often overshadowed by the monumental B-Minor Mass, J. S. Bach’s four shorter Masses deserve to be better known. California Bach Society’s performance of the Missa Brevis in G Major made a strong case for exploring these other Mass settings. Made up only of the first elements of the Mass liturgy (the Kyrie and Gloria), this compact piece traverses a great deal of emotional and musical territory in about a half an hour — making it an excellent choice as the first half of a concert program.

I heard the California Bach Society on Sunday afternoon, at the last of its three Bay Area presentations of this concert. The music was beautifully supported by the clear acoustics in the recently restored sanctuary of Berkeley’s First Congregational Church. California Bach excels in the intricate polyphony of Bach’s choral writing. Their sound is well-balanced; texts are delivered with excellent diction (in this case, in Latin); entrances are consistently secure; and above all, the singing is focused and clear. Bach’s beloved fast-paced melismas (strings of notes on the same vowel) interweave with energy and control. Artistic Director Paul Flight’s conducting is precise and supportive: tempos are clear and sustained throughout each movement.

The excellent Baroque orchestra did far more than accompany the chorus. Along with lithe violins and a strong continuo group (organ, cello, and double bass, with occasional bassoon), the crucial oboe solos were performed with beautiful expression by Lot Demeyer.

The second half featured Bach’s Cantata 21, Ich hatte viel Bekümmernis (I had great distress), an effective pairing with the Missa Brevis. Like the Mass, the cantata begins by looking inward, and goes on to explore the soul’s sense of personal sin through a variety of meditative vocal and instrumental writing. The mood is often dark, but the brilliance of Bach’s music ensures that sorrow is also uplifiting in its beauty and intensity. But neither the music nor the soul that it represents is left in melancholy; the cantata moves from its initial sorrow to assurance of divine grace, so much so that the cantata ends — a bit abruptly — in celebration, with the sudden addition of trumpets and drums in a triumphant chorus.

The soul that moves from sorrow to joy in the cantata is represented by the soprano soloist, in this case the excellent Caroline Jou Armitage, who sang with pitch-perfect clarity and affecting intensity in both the cantata and the Mass. Her blend with the oboe soloist was especially skillful. Other solo vocal contributions were less effective. Bass soloist Sepp Hammer (who also sang as a member of the chorus) has a pleasant voice but lacked presence, especially in the lower range. Tenor Jonathan Thomas too often forced his tone, and consistently failed to blend with the orchestra — for example, overpowering the lovely cello solo (played by Amy Brodo) near the end of the cantata.

Before the cantata, the choir, accompanied only by organ, sang the beautiful motet Tristis est anima mea by Johann Kuhnau, Bach’s predecessor as Cantor at St. Thomas Church in Leipzig. Exposed entrances at the beginning were a bit shaky (post-intermission inertia, perhaps), but the introspective mood (the text is drawn from Jesus’s anguished words at the garden of Gethsemane) picked up on many aspects of the Mass and anticipated the mood of the cantata that followed, making the whole program hang together as a splendid example of Bach’s masterful and prolific musical outpouring.

A Bolt of Primal Light From Cal Bach

Johannes Brahms' identification with an old tradition of music is the subject of the upcoming California Bach Society concerts, and choral music the composer wrote in this era has exceptional drama and impact.

Rarely performed music of masters and one younger brother made for a stimulating and surprising afternoon.