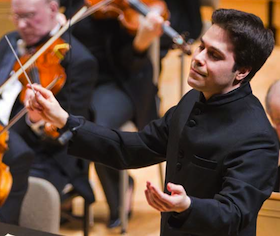 The California Symphony is well into its second season without a music director, and Sunday’s concert at the Lesher Center in Walnut Creek reflected the dynamics of an audition-season program. Under the board’s scrutiny, this time the candidate was Sean Newhouse, who has a strong resumè and possesses all the right musical skills. The program was engineered for audition purposes: Tchaikovsky’s exciting Fifth Symphony with a big ending, Mozart’s clarinet concerto, and an inoffensive piece of new music safely quarantined as a short concert opener.

Most of the work of a conductor takes place behind the scenes, and I am not qualified to remark on Newhouse’s ability to add value by developing an ensemble over the course of rehearsals. More important for a regional orchestra such as the California Symphony is the connection with the board and donors, which is not always taught in all the right schools. Newhouse came off as confident and articulate when he spoke from the podium.

The Tchaikovsky symphony is very familiar to musicians, so it was no surprise that the performance was well-polished. Newhouse’s decision to divide the violins with the second violins on the right side of the stage brought out a few details often overlooked in the work.

Without a music director, the California Symphony lacks a distinctive musical personality; still, it meets a good professional baseline. I would welcome some quirks, which tend to disappear when a music director does all the right things. The symphony’s string section is very clear, but it has a tendency to overbalance the winds. This could be ameliorated by raising the back rows of the orchestra on platforms, and it would also help serve to improve sightlines for the audience.

David Singer brought to the concert a huge sound … yet he flexed his chamber-music chops in the concerto.

Newhouse seemed slow to adapt to the multipurpose Lesher Center’s acoustical limitations, leaving in overly long dead pauses in the Tchaikovsky and encouraging overly legato phrasing (both of which would resonate in a good concert hall). But as music director, Newhouse would have the authority to find long-term ways to adapt the orchestra to the space and the space to the orchestra.

The concert’s new work, Les Espaces infinis, by Pierre Jalbert, premiered by the symphony in 2001, is a harmless, New Agey piece. Pentatonic cluster chords mingled with pedal tones and predictable phrases to conjure the effect of a slow movement orphaned from a more-substantial parent. One highlight was a mournful cello solo, played by Leighton Fong. Jalbert’s work on its own did not create the mood implied by its title.

The candidate Sean Newhouse has a strong resumè and possesses all the right musical skills.

The Mozart concerto featured David Singer, an accomplished clarinetist who hails from the Chamber Music Society of Lincoln Center and the Marlboro Festival. He brought to the concert a huge sound to match his large stature, yet he flexed his chamber-music chops in the concerto, playing a subsidiary line very softly in the final movement, to allow a flute solo to project. Newhouse and the orchestra offered sensitive support. I felt their Mozart style needed more forceful, shorter, and edgy articulation. For me, the key to Mozart lies in the tiny rhythmic gestures derived from dance, which propel the music forward. The slow movement, especially, seemed to hang back.

Singer offered a brief, unaccompanied encore, Oseh Shalom bimromav, by Nurit Hirsch, which is a popular tune in Reform Jewish temples during Torah processions. Singer exposed the tune for the pretty melody it is when slowed down and freed from the onslaught of congregational singing.