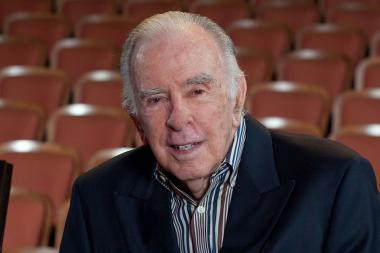 Don’t ever suppose that Carlisle Floyd can’t learn and showcase new tricks, just because he’s the veteran dean of living American composers. Hearing the newly released recording (on San Francisco’s Reference Recordings) of his latest opera, completed in 2016 (when Floyd was 90), will divest you of any such assumption. It’s an enviably innovative and engaging work, with a story based in historical fact, but unlike anything you’re likely to have encountered on the operatic stage.

Prince of Players centers on the titular 17th-century male actor, Edward Kynaston, who in Act I is in a gay relationship and carrying on the Shakespearean tradition of playing a female role. But by the end of Act II, we’ve seen him pass on to a heterosexual relationship and a male role on stage, in accordance with the dictates of English Restoration sovereign Charles II. Along the way, we hear Kynaston perform a song with the lewd title, “No Balls at All.” Would you ever imagine yourself applauding something like that, at an opera house near you? Let me tell you why I hope we all get that chance. 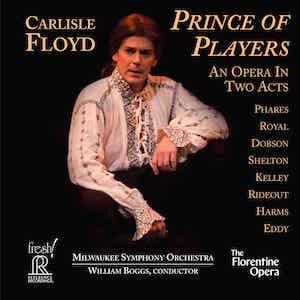 Every scene and every aspect of this opera and production (by the Florentine Opera Company of Milwaukee) is worthy of applause, even in the private setting of your sheltered home. More so than most operas of any length — including some of Floyd’s own — both the music and the libretto (written by the composer in less than two weeks) sustain interest throughout, partly because of how confidently these two elements are conjoined. This is evident from the opening scene, set as a performance of the smothering scene from Othello, some 60 or 70 years after the play’s debut. Keith Phares deploys a workable countertenor falsetto as Kynaston playing Desdemona, and returns to his natural, emotionally conflicted, and compelling baritone throughout the rest of the opera. Phares is partnered with Alexander Dobson, who portrays fellow actor Thomas Betterton (and Othello) in a somewhat over-the-top and comical baritone, nicely distinguishing the character differences between these two offstage friends.

With the entrance of Charles II, accompanied by his pretty young mistress Nell Gwynn, I’m alerted to how Floyd’s approach to his craft resembles Benjamin Britten’s. The giddy ebullience of Floyd’s “royal” fanfare, for example, evokes the merriment of the command performance for the Duke of Athens in Britten’s A Midsummer Night’s Dream. Floyd also sets dramatic conversation tastefully, not having the vocals compete with the orchestra. This allows tenor Chad Shelton to shine, in this scene, as the dilettantish regent, along with soprano Rena Harms (a Merola alumna) as a folksy sprite, herself aspiring to the stage.

The Florentine cast is consistently good, including secondary roles such as Miss Frayne and Lady Meresvale, sung respectively by soprano Nicole Heinen and mezzo Briana Moynihan. This giddy pair invites Kynaston, still in Desdemona’s costume and makeup, for a stroll in St. James’s Park, where Kynaston entices the attention of a drunken dandy, Sir Charles Sedley (the convincingly strident tenor Frank Kelley). Sedley embarrasses himself (and delights the ladies) by groping Kynaston, and thus discovering his true gender.

The ever-surprising story line has Kynaston, in the next scene, discovering that his dresser, Margaret (Peg) Hughes, is also a would-be actor who has been earnestly studying his performances. Kate Royal portrays Peg with an entrancing lyric soprano, illuminating the objects of her ardor. Her miming of Kynaston’s dramatic gestures is interrupted by the arrival of Villiers, Duke of Buckingham, who is Kynaston’s closeted lover, tenderly portrayed by tenor Vale Rideout.

I found myself noticing and then anticipating Floyd’s positioning of interludes, both between and inside the two acts and nine scenes. With these, Floyd alluringly presages or reflects on the psychological elements and circumstantial settings of the plot, maintaining the listener’s attention, with particularly fine deployment of flute and woodwinds. The composer continues to manifest an infectious blend of lyricism and dissonance, showcased in his first and best-known opera, Susannah (1955) and in the seven decades since. Conductor William Boggs paces the Milwaukee Symphony Orchestra artfully throughout Prince of Players.

Continuing his successful story structure (for which he credits a play and filmscript written about Kynaston by Jeffrey Hatcher), in Act II Floyd Kynaston’s self-doubt becomes a crisis  when Villiers confesses that he’ll be have to end their romantic relationship and submit to a marriage of convenience. The downward arc carries into yet another scene, with Kynaston in drag in a bawdy house, crooning the aforementioned “No Balls at All” in a distorted voice, accompanied by a grotesque instrumental arrangement. (Note: the song can be heard in our own times, if you’re interested, among rugby fans and on YouTube.)

A particularly pretty interlude introduces the delicate interaction between Peg and Kynaston in Scene 4, beautifully and credibly enacted by Royal and Phares, respectively. As she comforts him, he reveals more of his backstory, including an allusion to early sexual exploitation and disfigurement by jealous boys. She reveals that, “Loving you as I do, I want ... to restore you to the Kynaston I adore, I adore, and I will, I will!” He in effect finally cedes to her the role of Desdemona, and she engages him in the real-life role of her sexual lover and companion.

On the way to a perhaps expected but still-satisfying resolution, the following scene has the ever-faithful Betterton talking Kynaston into taking on Othello. Even if you can see it coming, you’ll find the final scene’s reprise of the smothering scene thrilling, thanks to all that goes into it: the lurking murky mood of the music, the pacing of this pair of fine dramatic voices, and most of all the credible magic with which Peg and Kynaston channel the passion of their new relationship through their Shakespearean characters.

Prince of Players was originally commissioned as a chamber opera by the Houston Grand Opera, Floyd’s long-time go-to company, but after its debut in 2013, impresario David Gockley told the composer, “This is a big sophisticated opera that deserves a full orchestra and world class singers.” On experiencing the Florentine’s reimagining of his work late last year, Floyd declared, “My 93-year-old heart is filled with joy, and oh, so much gratitude!” I think we all can join in that.

Carlisle Floyd’s Appalachian-themed study of cultural hypocrisy and sexual violence is more timely than ever.

In a beautifully mounted production that sets off another great performance by the beloved soprano Racette, Susannah at the S.F. Opera offers an ardent, anguished, and moving experience.

Goodbye, Mr. Chips Makes a Winning Transition to Opera in a New Film