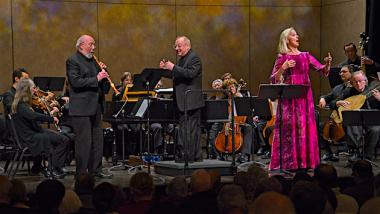 Caroline Shaw and PBO Make Magic on a New Disc

Back in March of 2019, when live music was a nourishing daily bread, mezzo-soprano Anne Sofie von Otter joined the Philharmonia Baroque Orchestra in a wonderfully varied program that ranged from Handel to Purcell to Arvo Pärt. There was a fourth entry on this repertory-stretching bill, the contemporary American composer Caroline Shaw.

She was represented by two songs, performed by Von Otter with an arresting, seraphic intensity. For many listeners, they may have been the memorable highlights of this admirable evening. 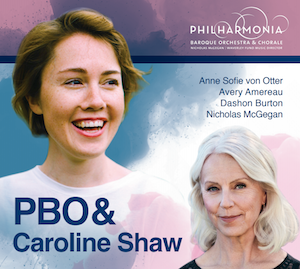 Both of those pieces, “The Edge” and “Red, Red Rose” (from Shaw’s Is a Rose trilogy, written for Von Otter), turn up on PBO & Caroline Shaw, a moving, right-for-the-moment new CD. Von Otter’s contributions are buttressed by those of bass-baritone Dashon Burton, contralto Avery Amereau, and the Philharmonia Baroque Chorale. All, as well as the orchestra itself, are in vividly fine form under artistic director Nicolas McGegan’s baton.

In commissioning the 2013 Pulitzer Prize-winning Shaw (Partita for 8 Voices), Philharmonia Baroque found an ideal partner to cross the divide between a period instrument ensemble and present-day music. Shaw’s tonal centering, strophic structures, and transparent textures make the improbable seem altogether natural, even inevitable. She sets her texts (by the 18th-century Scottish balladeer Robert Burns, the contemporary poet Jacob Polley, and the composer herself) with an attentive, Handelian feel for both the long verbal arcs and nuanced subtleties of line and stanza.

There is, beyond all the technical and artistic finesse, something prescient about this disc arriving in the midst of a terrifying pandemic. Again and again, through these tender and incisive settings, Shaw strikes the harmonizing chords of intimacy and a long-view perspective that both consoles and summons a listener to a heightened awareness of the here-and-now and its place in human history.

In the stirringly expansive “And So,” Shaw supports the line “a rose is how I’m keeping track of time” with tick-tocking pizzicati that seem to issue from some cosmic clock. When Burton invokes “our dark globe” full of “raving politics never at rest” in the song “Of a Million Million,” Shaw unleashes an unsettling polyrhythmic chatter.

The latter piece is part of The Listeners, an oratorio recorded live at Berkeley’s First Congregational Church in March and October of last year. The drama unfolds right away, with a spare chant-like melody over a sustaining pedal point that expands inexorably into a multivoice chorus, joined in turn by the timpani and chaotically ecstatic strings.

Burton is both somber and sensuous in “Let Your Soul Stand Cool.” Insistently pulsing chords and a melismatic vocal line enhance “In World’s Vast Frame.” A percolating oboe line becomes the driving musical impulse in “Maps,” in which Burton and Amereau, their voices full of mournful longing, merge the personal and the political. “You held me for so long,” they sing in prayerful accord. “I wish maps could be without borders.”

The Listeners, which includes several sections of spoken dialogue (one in multiple languages and another from a speech by Carl Sagan) was inspired in part by the Golden Record, a disc carried by the Voyager spacecraft for potential listening by extraterrestrials. Shaw calls that notion “absurd,” but takes the underlying intent seriously. “I wanted to construct a journey,” she says, “looking at the ways we see the sky and wonder about the universe and the ways that we understand the earth and our planet.”

If these lofty aims occasionally divert the music into Saganesque TV film-score hyperbole, The Listeners has plenty of authentic reverence and range. No sooner has the hymn-like anthem of innocence in “Sail Through This to That” sunk in than the exultant agitation of “Pulsar” takes over.

Even when her poetic economy of means plays out in the unaccompanied shimmer of a harpsichord or a quietly urgent ground bass, Shaw has her eye and ear on the big things that matter – the heart and collective connections we need to see us through the darkest hours.