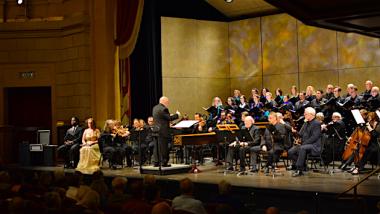 Philharmonia Baroque Orchestra fans know by now that its concert sets are not confined to the 18th century, or even the surrounding centuries. But the orchestra’s successful forays into commissioning new music are linked mainly to one composer, Caroline Shaw. Shaw has created four works for the orchestra, the latest of which, a cantata/oratorio called The Listeners, anchored the season-opening performance at Herbst Theatre on Thursday night, conducted by Music Director Nicholas McGegan.

It surely helps Shaw’s connection to the orchestra that she lists Mozart and Beethoven (the operas and the Op. 74 string quartet, respectively) as things she most loves. And she is alive to the specific details of period instrument sounds and uses them in ways that are unforced and utterly convincing. Her music speaks easily and directly to any audience, which is the rarer gift.

The Listeners is an optimistic piece for a dark time. It’s based on the launch of Voyager 1 into deep space in 1977, carrying a golden record of greetings, music, sounds of nature and wildlife, chosen by a committee chaired by astronomer Carl Sagan. As Sagan said at the time, “the launching of this ‘bottle’ into the cosmic ‘ocean’ says something very hopeful about life on this planet.” But the cantata is also about wonder: “I wanted to construct a journey looking at the ways we see the sky and wonder about the universe and the ways that we also understand the earth and our planet,” Shaw said in an interview.

The record itself is incorporated into the music, present physically as well as aurally, since Shaw chose to have bass-baritone soloist Dashon Burton play parts of the record from a turntable, as part of the performance. We also hear, at the work’s center, part of Sagan’s “Lost Lecture” (Cornell University, 1994), rediscovered in 2017 in the Cornell archives. Sagan was responding to a picture of Earth taken from Voyager 1 in space: “To me, this picture underscores our responsibility to deal more kindly with one another, and to preserve and cherish the pale blue dot. The only home we’ve ever known.”

The music covers just as much territory, beginning with a wordless, lovely melody sung by contralto Avery Amereau, followed by a fruitful progression of chords that is the piece’s ignition. The strings rub together in gentle clouds of dissonance, and the Philharmonia Baroque Chorale, which sparkled throughout, responds, singing the word “brillas” (you shine). It’s familiar emotional territory: the sense of sublime vastness is shared with sci-fi movie scores, such as Hans Zimmer’s Interstellar, (which Shaw says is a favorite). But this chord progression has Handelian movement, even grandeur, and the orchestra and Chorale rendered it with much more color and weight.

Shaw’s sensibility transforms simple gestures into music that resonates strongly with an audience. The Listeners’ highly contrasting textures delve into all kinds of styles. Just before the epilogue is a movement called “Pulsar,” a minimalist orchestral toccata that sounds not at all out of place. Shaw’s text-setting is similarly varied, harmonically grounded and beautifully lyrical, yet rhythmically nimble and elusive. Most impressive was “Maps,” which welded both soloists and the Chorale into an intricate setting with the rhythm constantly refreshed with new details and changes. The performance was all you could wish for.

The first half of the concert was all Handel; McGegan, the orchestra, and the chorale were on home turf here. The Ode for the Birthday of Queen Anne opens unusually, with a lyrical duet for alto and trumpet. Countertenor Reginald Mobley and trumpeter John Thiessen were perfectly matched and set the tone for a performance which luxuriated in this continuously melodic score. The birds and rolling streams and hissing Envy were given rhythmically pointed performances, but the sensuous siciliano (“Kind Health descends”), pairing soprano Arwen Myers and Amereau, was the most memorable movement, at least until Burton and the chorale bit into the spirited finale.

I had never heard the suite from Terpsichore, which was created for the 1734 revival of Il pastor fido, but I was not surprised to find that it’s brilliant: the 1734–1735 season was a pretty good one for Handel, with the premieres of both Ariodante and Alcina. Here we find a gorgeous sarabande and an extended, inventive chaconne in addition to other charming dances. McGegan and the orchestra worked their magic on this score as well, in a performance that lifted the spirits almost as much as The Listeners.

The Philharmonia Baroque premieres a new oratorio inspired by Bach but with a very 21st-century twist.