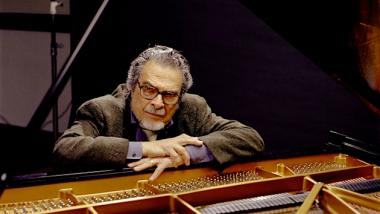 As life expectancy has gotten longer, many artists have continued to play concerts well into their golden years. Legendary pianist Vladimir Horowitz performed well into his 80s, and many of the top leading pianists today such as Martha Argerich are well into their 70s. In recent years, notable pianists such as Meneham Pressler (born in 1923, now 95) Gary Graffman (b.1928) celebrated their 90th birthdays with concerts.

This year, San Francisco’s own Leon Fleisher and his best-known protégé, Jonathan Biss, follow suit by celebrating Fleisher’s 90th with a concert tour. They began at Carnegie Hall, played two more concerts on the East Coast, and then finally came home to the Herbst Theatre on Feb. 12.

Presented by San Francisco Performances, this celebration was no ordinary recital. Fleisher began the concert with a quietly self-assured reading of Bach’s Sheep May Safely Graze, arranged by Egon Petri. Taken at a relaxed tempo, the steady rhythm evoked the ticking of a clock, as if the music was a narrative of the pianist’s long life, with different sections depicting different characters and themes, from peace to struggles. The reminiscence concluded quietly but with a sense of immense satisfaction.

Then, Jonathan Biss took the stage to deliver a free and dynamic reading of Beethoven’s late sonata, Op.29 in E Major. The first movement sounded like youthful wings soaring into the sky, with a sense of nervousness and uncertainty, though the stern and somewhat aggressive reading of the second movement presented a contrast, marred by minor errors. In the third movement, which consists of a theme and variations, Biss brought back a sense of freedom with some surprising rubato, but each of the variations were painted with different characters. The staccati in the second variation depicted joy and delight, and the whirling third variation was full of energy. However, it seemed as if Biss was startled by something, with an extra beat inserted after a repeat in the following variation, and a memory slip in the fifth variation that stopped the music cold. After collecting himself, Biss rendered the final variation and its infamous trills with bravura, a wide dynamic range, and tremendous exuberance.

Leon Fleisher took stage again for a dramatic reading of the colorful LH (= left hand) by the late American composer Leon Kirchner, a friend of Fleisher. The piece was inspired by two poems, Emily Dickinson’s “Ah the Sea, Might I but Moor Tonight in Thee” and Edna St. Vincent Millay’s “A Quickening Gust of Wind Flew Up to Me,” and its dramatic, polytonal colors popped out. It should be noted that Fleisher, for whom the piece was written as a surprise, suffers from focal dystonia that resulted in the loss of two fingers in his right hand, but continues to perform left-handed repertoire, as well as conduct and teach at Peabody.

Fleisher then took a microphone and reminisced the time when he performed on the very same stage, then called the Veterans’ Auditorium. He shared that he had forgotten how the movement of the Beethoven Concerto began, and had to think hard for a moment. That was in 1938. He also told his story of meeting Sergei Rachmaninoff next door in the backstage of the War Memorial Opera House, clutching the hand of his mother, where the giant asked him whether he too was a pianist, and advised him that music is a “baaaad beeeziness,” which elicited laughter from the audience.

Departing from the program, Fleisher began with a poignant interpretation of Debussy’s “La Puerta de la Vino” (Preludes, Book 1) that evoked a dark night scene, followed by a clear but stoically restrained reading of “Clair de Lune” (from Suite bergamasque). With a luxurious sense of time with a relaxed tempo, the audience was basked in the indulgent moonlight.

Following two pieces in D-flat major, I incorrectly guessed that he would then perform Chopin Prelude No.15 “Raindrops,” also in D-flat major, which would have been appropriate given the weather outside. Instead Fleisher gave a peaceful and contented reading of the Chopin Nocturne, Op. 27, No.2, also in D-flat major. The minor sections were troubled, though: reaching but never quite attaining the heights in view.

The second half of the evening began with a tribute video, of an interview conducted last year with Fleisher, incorporating images from significant events in Fleisher’s long life and career. Jonathan Biss then returned to the stage, and presented Kirchner’s Interlude II, a kaleidoscopic work that sounded like more than just an interlude. Biss played with confidence and flowing colors streamed into the hall.

Fleisher was then joined by the Telegraph Quartet and bassist Charles Chandler of the San Francisco Symphony for a chamber arrangement of Mozart Piano Concerto in A Major, K.414. Joyous in nature with a spritely character, the music showed Fleisher at his peak. Fast trills sparkled, and lithe passages dashed about cheerfully while crystal-clear lines preserved a sense of purity and transparency.

In all, the event was more than a concert — a true celebration of Fleisher’s long career that started on that very stage over 80 years ago. And, given the energy shown by Fleisher himself, another big celebration in 10 years should not be out of question.

Leon Fleisher: Relishing His Nine Lives, with Two Hands on the Keyboard

The celebrated pianist essays an all-Schubert recital at three Bay Area venues, with his friend and colleague Jamie Laredo on violin.

On the Bench With Jonathan Biss

The pianist, in concert with the S.F. Symphony this week, talks about his own Beethoven projects, courage and risk-taking in performance, sharing music as an educator, and more.