’Tis the season when opera companies turn to family friendly programming, light of mood, rich in melodies and, if possible, a story line that captures the festive atmosphere of the holidays — children welcome.

In that tradition, Los Angeles Opera unveiled a delightfully buoyant production of Gioachino Rossini’s La Cenerentola Saturday at the Dorothy Chandler Pavilion, which attracted a bevy of young audience members including a number of gaily adorned, tiara-topped Cinderellas.

After the storm and stress of Verdi’s Il trovatore and the erotically conflicted sound bath that is Wagner’s Tannhäuser, Cenerentola arrived like a confection of delights.

Its exceedingly well-balanced cast features a host of LA Opera veterans (Rodion Pogossov, Alessandro Corbelli, Ildebrando D’Arcangelo, Erica Petrocelli, and Gabriela Flores) as well as a pair of noteworthy debuts by a mellifluous mezzo-coloratura from Naples, Serena Malfi, and a charming bright-voiced tenor from Kroonstad, South Africa, Levy Sekgapane. They are both rising stars.

Due to the vicissitudes of the pandemic, the production that LA Opera had originally contracted for became unavailable, so the company went shopping. The result is a playful, eye-pleasing staging from the Dutch National Opera with scenery by Chantal Thomas and costumes by Laurent Pelly and Jean-Jacques Delmotte. It takes a kind of Kurt Vonnegut "unstuck in time" approach to the familiar plot, contrasting a cotton-candy pink fairytale kingdom of bewigged courtiers, with a dreary domestic landscape of washers, driers, bathtubs, shabby couches, and a black-and-white television that looks like it comes from the faded pages of a 1950s issue of Good Housekeeping.

Cenerentola, like all Rossini’s opera buffas, requires an orchestral performance (like a Ferrari) that can shift gears smoothly; a cast of singers whose distinct vocal ranges and coloratura technique can shine in solos, duets, and the most intricately interwoven ensembles. And it needs a director who can blend farce and frenzy with sensitivity and tenderness.

LA Opera’s production (onstage through Dec. 12) combines the skillful ebb, flow, and flourish of Roberto Abbado’s conducting with Laurent Pelly’s clever and rhythmically inspired direction that choreographs the ensemble’s gestures to fit the pulse and patter of the phrase.

Serena Malfi, as Angelina (Cinderella) has the ringing high notes, resonant low notes, and abundant charm of Cecilia Bartoli, a onetime favorite in this role. No singer I have ever seen in this part does a better makeover from dusty and dowdy to elegance and glitter, even if her ball gown shows signs of her sooty point of origin.

From the moment Malfi first appears in her apron and yellow rubber gloves, with mop in hand, she captures your heart. She is so downtrodden her glasses constantly slip off her nose. She spends much of the first act feverishly dusting every nook and cranny or loading endless piles of laundry for her primping and whining half-sisters, Clorinda (Petrocelli) and Tisbe (Flores). Her grumpy stepfather, Don Magnifico (Corbelli) doesn’t treat her much better. Thankfully, she will soon be saved by her Fairy Godfather, Alidoro (D’Arcangelo).

Following in the tradition of commedia dell’arte, Rossini delights in his opera buffa comic characters — in this case Corbelli’s down-at-the-heels nobleman, Don Magnifico, and Pogossov’s Dandini, the valet who would be prince. Both play the over-inflated bluster and quicksilver patter songs to the hilt. Watching Pogossov, in all his puffed-up pink finery, I couldn’t help thinking of “You’ll be Back,” King George’s famous number in Hamilton.

And when the curtain fell and the ovations faded, it was lovely to see all those little Cinderellas heading home with smiles on their faces after their night at the ball.

LAO takes on the challenges of Wagner’s big Romantic opera.

The series is back for an eighth season of concerts in 2022.

The superstar soprano will both perform and lead discussions on music and health.

The company opens its season with a new production of Verdi’s flawed masterpiece.

The company is also bringing in a new resident conductor to replace Grant Gershon, who is stepping down. 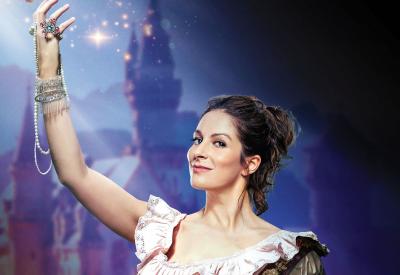