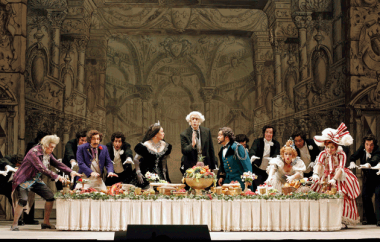 It has been 45 years since director Jean-Pierre Ponnelle (1932-1988) made his U.S. debut at San Francisco Opera as both designer and director of Rossiniʼs La Cenerentola. The fifth revival of that production is currently onstage again at the War Memorial Opera House. In a show where the singers are the story, SFOʼs current cast keeps the production feeling fresh.

Directed by Gregory Fortner and for some reason marketed by the company as “Cinderella,” Ponnelle’s version has been recreated at several European opera houses and is likely to travel around the world for a while longer.

In sync with the sets, Fortner has decided to turn some of Rossini’s personages into quasi cartoon characters, exaggerating the buffoonery of their thoughts and actions. Only Angelina/Cinderella, her suitor prince Don Ramiro, and the philosopher Alidoro come off as flesh and blood people with real human emotions.

La Cenerentola (1817) is a straightforward adaptation of the famous European folk tale of Cinderella, with some minor localizations and the evil stepmother replaced by an equally nasty stepfather, ironically named Don Magnifico. Similarly, the fairy godmother became Alidoro (with magical powers), and the glass slipper turned into a pair of matching bracelets.

It was likely intentional that Rossini saved the most brilliant musical inventions in his riveting score for his heroine’s radiant entrance as the mysterious, veiled beauty at the prince’s palace, but unfortunately, it took the San Francisco Opera cast until that very moment, deep in the first act, to make the musical magic happen.

There were a few bright spots earlier, such as the first aria of Don Magnifico (the wonderfully robust bass-baritone Carlos Chausson, in his SFO debut), in which he recounts the dream of seeing himself as a flying ass; and the lovely duet between Don Ramiro (Merola program graduate René Barbera) and Angelina (French mezzo Karine Deshayes) when they set eyes on each other and experience the power of love at first sight; and also the scene in which Alidoro tells Angelina that her life will soon change.

The latter was a beautifully staged interaction between Deshayes and the outstanding American bass-baritone Christian van Horn, impressive in its simplicity, with Alidoro projected as a gigantic supernatural shadow on the stage curtain.

The remainder of the first act and the entire second act had distinctly more musical brio than before. Barbera was stellar in the aria “Si, ritrovarla io giuro”, in which Ramiro vows to find his beloved, and Deshaye’s Angelina/Cinderella became resplendent overall.

It may have been by design that Deshayes held back during the first half of the opera, but once she emerged, along with her character, she became a different Angelina/Cinderella in almost every respect, fulfilling the promises of her San Francisco debut with impeccable technique, effortless coloratura, a crystal clear upper register, excellent projection, and a commanding stage presence.

The parts of Angelina’s stepsisters Clorinda and Tisbe were terrifically sung and acted by American soprano Maria Valdes and Latvian mezzo Zanda Švede respectively. Both are, like Solis, in their first year of S.F. Opera’s Adler Fellow program.

Spanish conductor Jesús López-Cobos, whose last appearance with San Francisco Opera was in 1974, kept the orchestra and singers on track throughout the lively tempos of Rossini’s score, and the men of the San Francisco Opera Chorus, as always expertly prepared by Chorus Director Ian Robertson, were fabulous and comical, an additional vocal and dramatic character in the opera.