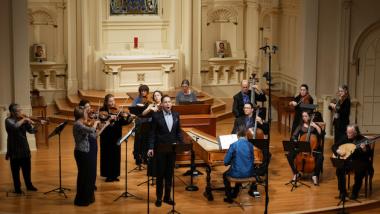 Christopher Lowrey Gives a Soul-Shaking Performance With Voices of Music

“I feel my blood like ice,” the grief-stricken hero of Vivaldi’s 1727 opera Farnace declares. In a stunning, soul-shaking performance of the aria “Gelido in ogni vena” countertenor Christopher Lowrey made that ice burn white hot.

It happened on Saturday, Dec. 21, in the first of three Vivaldi arias the singer performed in the Voices of Music concert at St. Mark’s Lutheran Church in San Francisco. Lowrey had already impressed in the first half of the evening, displaying his formidable tone, dynamic range, and sculpted phrasing in a trio of Handel operatic extracts. But it wasn’t until he returned for the Vivaldi set, after intermission, that the artist’s powers came fully to the fore in a dramatic, deeply dimensional way.

An arresting flurry of shivery, descending spasms in the strings set up Lowrey’s coruscating Farnace solo. In a voice that wailed upward, plunged straight and alarmingly out of countertenor territory, and raged with siren-like intensity, he gave the character’s lament for the “shadow of my lifeless son” a palpable reality. Astonishment, uncomprehending terror, rage, and guilt rose and crashed over in mounting waves. The technique was a marvel, and then the listener forgot about it, swept up in the emotional tide.

Lowrey, who has played the opera’s title role in an Australian production, didn’t only perform the aria. He embodied it, trembling with fury and shame, his eyes brimming with tears. He wasn’t afraid to look and sound helpless, stricken, contorted with high feeling. And through it all the raw musical majesty carried on. The St. Mark’s audience, which had been cheering like a home-team crowd after every number up until then, met this extraordinary moment with a quieter response, as if humbled and shaken to the core by what they’d just witnessed.

Lowrey, whose beaming, mobile face is another of his ingratiating assets, proceeded to promptly shift gears and toss off a brief, gleamingly ornamented aria from Teuzzone. The flourishes took on a near military precision: “I ready the arrow of my fury.” It was like the vocal equivalent of an exquisitely tooled sword and shield.

The master countertenor closed out his Vivaldi tribute with the gorgeously consoling “Abbia respiro il cor” (Give the heart respite) from La Silvia, Cushioned by the sumptuous, discerning support of the Voices of Music Baroque orchestra, Lowrey spun out his luscious long lines, plush rounded phrases, and hushed pianissimos. In three contrasting selections, Lowrey not only made believers of the audience in him, but in the underappreciated glories of Vivaldi’s vocal music.

Two of the composer’s vast catalogue of concertos framed Lowrey’s star turn — one for cello soloist (a recessive William Skeen) and the other, richer one featuring Skeen (in more assertive form) and two violinists (Carla Moore and Rachel Ellen Wong, both fine).

The headliner concerto was Pietro Locatelli’s “Harmonic Labyrinth,” which lent the entire VOM concert its title. Violinist Alana Youssefian was the very hard-working soloist in this odd, somewhat exhausting work, a chain of bravura gestures in search of a compelling purpose.

Again and again, especially in the last movement, the orchestra went silent or retreated to a pulsing timekeeper role as Youssefian fiddled her way through one cadenza after another. There were a few conversations with other instruments and another diverting one in which the soloist took on a high- and low-strings exchange with herself. But much of the material felt prolix and generic. A sensual middle-movement Largo served as welcome break from the torrent of notes.

A treading account of a familiar Handel Sarabande opened the program, followed by Lowrey’s first appearance. There were niceties throughout, beginning with the emotional eventfulness and yearning ache of “Dove sei, amato bene?” (Where are you, beloved) — from Rodelinda. The singer brought an insistent, declamatory immediacy, attentive emphases, and gently trilled sorrow to a number from Giulio Cesare. And his fleet, emphatic quatrain from Partenope flew by in exciting fashion, singer and the ensemble going at full gallop.

Fine as it was, Lowrey’s Handel trio proved to be an appetizing table setter for the Vivaldi feast to come.

A Gripping St. John Passion From S.F. Symphony Chorus and Voices of Music

The early music ensemble colors outside the borders with inspiring collaborators from Azerbaijan and Québec.

The camaraderie of the Early Music ensemble creates an intimacy that makes each performance a joy to watch.