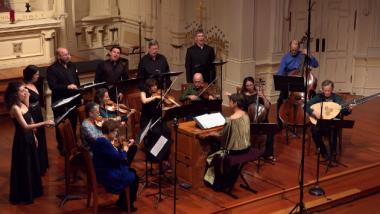 A concert by early music ensemble Voices of Music is an informal affair. Audience members may find themselves welcomed as if they are extended family by Voices of Music (VOM) founders, co-artistic directors, and husband-and-wife team Hanneke van Proosdij and David Tayler. The two also offer a brief and informal spoken introduction to the concert and the concert program.

The overall atmosphere of familiarity and friendship extends to the concert stage, where Van Proosdij and Tayler (on organ and archlute, respectively) are joined by some of the early music specialists with whom they regularly perform in one or more of the many period ensembles in the Bay Area.

The concert was centered around the somber oratorio Vanitas Vanitatum by Giacomo Carissimi and the sorrowful Stabat Mater by Agostino Steffani. It also included Monteverdi’s sensual madrigal Con che soavità, sung with great intensity by soprano Kampani. In the piece, the love-struck protagonist laments that his beloved cannot talk and kiss at the same time because these “delights exclude each other.”

With the strict use of only one player or singer per part, VOM produces a musical image that is incredibly open and transparent. The strings and continuo were vividly clear in Arcangelo Corelli’s concerto grosso in F Major Op. 6, No. 2, outlining the concerto’s broad musical structure and changes in mood while delicately filling in the details.

The vocalists were similarly admirable in Vanitas Vanitatum, individually and in smaller groups portraying the unnamed characters in Carissimi’s oratorio who ruminate on the futility of their earthly existences and of the world in general.

Blending their individual timbres, the six singers were at their best in the choral parts of the Stabat Mater, culminating in the mournful “Quando corpus morietur” (“when my body dies”), which suddenly makes way for an exuberant fugal finale on “Fac ut animae donetur paradisi gloria” (“grant that to my soul is given the glory of Paradise”) and a glorious “Amen.”

With its unmistakable on-stage camaraderie, the ensemble creates a palpable intimacy during concerts, which is preserved in a series of beautifully produced recordings and can also be savored in a number of high definition online videos. These have accumulated more than 16 million views worldwide, justifying the claim that VOM is the most popular Early Music ensemble in America.