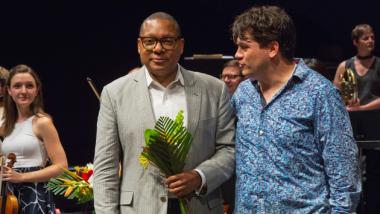 Some people claim that all music is just music, regardless of what kind it is. Wynton Marsalis knows better. As a renowned jazz trumpeter, bandleader, and educator who’s also been involved with classical music since performing the Haydn trumpet concerto at the age of 14, he’s well aware of the differences in idiom between the genres, and the differing constraints on and characteristic habits of their performers.

But he also sees the commonalities between jazz and American classical, particularly in their shared roots in Anglo-Celtic folk music. He has made it his mission to bring them together and to teach classical musicians to play with the character of jazz. Over the last two decades — he’s now 57 — Marsalis has been composing jazz-inflected music for the classical concert hall. Two major works from this project formed the final concert of this year’s Cabrillo Festival of Contemporary Music, on Sunday at the Santa Cruz Civic Auditorium. The Cabrillo Festival Orchestra was conducted by the festival’s music director, Cristian Măcelaru, who has worked with Marsalis before.

This sounded like a most intriguing program. Marsalis says he is working in the spirit of George Gershwin, Leonard Bernstein, and Duke Ellington, bringing together disparate traditions and demonstrating common humanity in them. Listening to his work as classical music, which is how it was presented at this concert, I was reminded of a different set of composers, but there’s no question that Marsalis has found a mixture with a distinctive flavor of his own.

The focus of the concert was on the Concerto in D for Violin and Orchestra, written in 2015 for the Scottish violinist Nicola Benedetti, who played it on Sunday. It’s a large work, in four movements lasting over 40 minutes. Though Marsalis says he does not want the work to be rushed, and it carries a variety of moods, the overwhelming impression it gives is of bursting with nervously jittery energy.

This is principally due to the solo violin part, which is nearly continuous and consists primarily of vigorous sawing. Benedetti’s bow flickered back and forth with concentrated diligence, her line often sounding disconnected from whatever the orchestra might be doing. The opening idiom, seemingly the basic language of the work, is neo-Romantic modernist, developing at times an angularity similar to Shostakovich. Gradually the solo part is infected with the flattened and bent notes and slides of blues scales, not typical of neo-Romantic music.

The concerto’s purest excursion into the blues came in one of a set of episodes that excursed into differing styles. This was a restrained and lyrical vocalese for the violin full of bent notes. It was overwhelmed, however, by other episodes that ran even faster than the default, turning Benedetti’s bowing into continuous double-stops, varied with some two-hand pizzicato, in Appalachian fiddle style. More familiar with Appalachian fiddle than the blues, I judged that Benedetti had captured the vigorous rhythmic and melodic freedom characteristic of this folk idiom.

Meanwhile the orchestra was experiencing episodes of its own. The brass frequently squealed and whooped and wailed. There were outbursts of circus music and big band music. A marching band made several appearances, heralded by piercing whistles, sounding like the bands from Charles Ives’s childhood that he liked to put in his more whimsical music. There were rhythmic punches. There were a couple spots where the orchestra members clapped or stomped their feet, as if this were a Michael Tilson Thomas performance of Copland’s Rodeo.

These episodes, though welcome for their variety, appeared and recurred with seeming randomness, contributing to an impression that the concerto continued beyond the point of having anything to say that it hadn’t said already. The topper came at the end, when Benedetti, who had already begun the concerto by emerging her sound slowly from silence, quietly played a repeating figure while wandering offstage — a rare though not entirely unprecedented stage direction in classical concert music.

Marsalis’s The Blues Symphony for orchestra is an even larger work, seven movements lasting an hour. It’s recognizably by the same composer, but has an entirely different feel. Here there are occasional but very few blues notes; instead, Marsalis explains, the symphony is built around a repeating 12-bar blues progression. This is kept in the bass and functions roughly as a passacaglia.

Again, as with the concerto, there are exceptions to the general mood and at times the music becomes quite raucous. For the most part, though, it’s cool-toned and genial where the concerto is nervous and jittery. The diatonic consonance, cheerful mood, generally pop-orchestra sound, and smooth texture all contributed to this. Though more complex and varied in construction, it began to sound to my ears like the picture-painting music of Ferde Grofé or a whole succession of MOR-format orchestral pop composers popular in the 1950s, the decade to which I would have assigned this work if asked to guess blindly.

Where the concerto had recurring episodes, the symphony had designated movements with varied settings and inspirations. Their distinctiveness didn’t prevent me from getting lost in the program notes and mistaking the Sunday Baptist church movement, which mutates into an exploration of shuffle rhythm in different American traditions, for the following Manhattan movement, thinking that it ran heavy on the urban sophistication and a “cool of the night” setting.

While there is much to admire in Marsalis’s music, in the end I found that I did not enjoy listening to it. The symphony was the less stressful half of the program, but — the more intense products of early 20th-century modernism aside — I have never felt so pulverized by a concert. Despite the composer’s intentions, his concerto is rushed, pushy, and disintegrated, and brilliant and diligent playing by all concerned does not disguise this.

The violinist talks about performing the revered jazz trumpeter’s new violin concerto at the Cabrillo Festival on Aug. 11.

Tan Dun’s Secret Songs Get an Airing at Cabrillo Festival

The composer’s work, based on a women’s vocal tradition of Hunan Province, dominates the festival’s Saturday concert.

The prolific polymath talks about her upcoming premiere, the progress of women composers, and her commitment to music education.