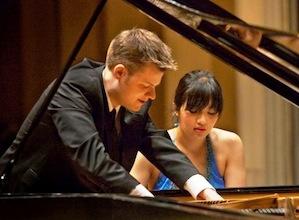 Amid the vast piano repertoire, there is a distinct nook that warms the heart of piano lovers: the world of piano ensembles, encompassing works ranging from intimate duets to thunderous two-piano/eight-hands repertoire, and even beyond. The history of piano ensembles reaches from the likes of Wolfgang Amadeus & Maria Anna “Nannerl” Mozart to Argerich & Freire and many more. The audience at the McAfee Performing Arts Center in Saratoga on Saturday had the privilege of hearing the most dynamic piano duo of this generation.

Greg Anderson and Elizabeth Joy Roe met as freshmen at the Juilliard School in 2000, where they earned bachelor’s and master’s degrees in performance. They encountered each other in their piano ensemble class, and recall sight-reading together Brahms’ Variations on a Theme by Haydn. That notoriously difficult piece requires the two pianists to be in perfect synchronicity, especially in the transparent opening theme where both have essentially identical scores. They were stunned to discover that they were naturally matched, and knew immediately that they were born to perform with each other.

Quite appropriately, Anderson and Roe started Saturday’s recital with the aforementioned Brahms Variations. It was phenomenal to see them ease into the theme in perfect unison with confidence, then exhibit their very distinct personalities in the variations. Anderson is the sensitive intellectual while Roe is the passionate firebrand, yet they never stepped on each other, instead giving and taking in perfect synchronicity.

Their interpretation explored a gamut of colors and tempos. The introspective fourth variation was solemn, and the whirlwind of the fifth variation was taken at an aggressive, blistering pace without neglecting its humorous side, finishing with a deftly light touch for the last chord. The triumphant Finale was a riot of colors, and a full orchestral sound filled the hall.

Their recital gave further proof that the survival of “classical” music depends on remaining relevant in today’s culture ...

Speaking of a riot, the piece that followed was the duet version of Stravinsky’s Rite of Spring. I was disappointed to hear only the first half of the work, yet I acknowledge that their tremendous and youthful energy figuratively exploded at the keyboard. As a duet, they were able to take far more liberty and to indulge in undulating, heaving tempos than would be possible with an orchestras. They unapologetically approached the work as a stand-alone piano piece, as the work was first written as a piano duet work, from which the orchestral score was drawn. (Among the first of those who performed the duet with the composer was none other than Claude Debussy, who famously walked away in stunned silence after their initial reading.)

Amidst the riot, the tonal and rhythmic details were precisely laid out. Anderson and Roe brought out lines and shapes often lost in orchestral performances. Overall, it was a refreshing performance for the 21st century, awakening such jaded ears as mine.

As if the “Riot” of Spring wasn’t hard-core enough, the pair continued on to present their own transcriptions and arrangements. Of particular note was the Libertango, by Astor Piazzolla. Here, it was not simply a sensual auditory experience, it was also a visual, precisely choreographed, sizzling dance.

As the music danced in the piano, their hands danced on the keyboard. Their limbs intertwined, exchanging the same physical space with each other, and their hands even reached inside their piano to mute the strings, creating an extra dimension in their tonality. Their eyes, too, were fixed on each other as they explored the sensual character of the dance outside the confines of their instrument. The level of passion and the heat was stifling, as in the summer in Buenos Aires where the dance was born.

(Incidentally, a music video of this Libertango was the first video they posted on YouTube. They have since gained vast exposure, and their videos have been seen by millions.

Aside from their ebullient flair, what distinguishes Anderson and Roe is that they continually incorporate popular culture into their repertoire. This practice is hardly new, but has been neglected for much of the 20th century. Just as Chopin incorporated Polish folk dances, Anderson and Roe perform today’s popular music, which they arrange for themselves. On Saturday they presented their arrangement of Paranoid Android by Radiohead, from the iconic 1997 album OK Computer. Not merely treating it as a literal cover of the original song, Anderson and Roe extended it to an extravagant, yet cool, reinterpretation of the song, with their own stamp on it. Radiohead and Thom Yorke fans may be appalled by the departure from the original, yet the arrangement exudes the explosive creativity that the duo possesses. In many ways, this arrangement elevates the latent artistry of the original to a new level.

The duo concluded the program with their own Carmen Fantasy. Compressing a three-hour opera to 13 minutes, it made for a wild ride through the passionate story, lifting the audience to their feet at the end.

The exuberant pair indulged the audience with three encores: their own arrangements of Khatchaturian’s Saber Dance, the “Ballet” scene from Gluck’s Orfeo and Euridice, and finally their homage to the great Michael Jackson with their thrilling arrangement of Billie Jean. Their recital gave further proof that the survival of “classical” music depends on remaining relevant in today’s culture by incorporating today’s culture, just as Schubert, Chopin, Liszt, Stravinsky, and Bartók did in their own day.