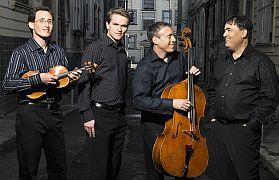 Kwami Coleman on February 19, 2008
Concertgoers looked a little unsure as they walked through the doors of Stanford’s Dinkelspiel Auditorium last Saturday. Unlike a crowd eagerly anticipating a performance of Brahms, those in attendance for the Turtle Island Quartet’s "A Love Supreme: The Music of John Coltrane" appeared to be expecting a great deal of the unexpected. A string quartet billed to perform what is arguably one of the most monumental works in jazz history, composed and originally performed by an ensemble led by one of the greatest musicians of the 20th century, surely raised as many questions as it did eyebrows. The artifacts on the stage foretold a little of what was to come. On the stage floor, to the right of the cellist’s empty seat, sat an effect-pedal board attached to an amplifier. Neither the Yoshi’s regulars nor the San Francisco Symphony season ticketholders were distinguishable in the crowd, but both witnessed an energized, inspired performance of Coltrane’s masterwork from a group that walked a careful line between musical worlds. In 1963, John Coltrane made the oft-quoted assertion that “music shouldn’t be easy to understand,” roughly a year before he and his quartet entered the studio to record the transcendent four-movement suite featured in the Turtle Island Quartet’s program. And much about Saturday’s program — which featured, among other things, arrangements of other works by Coltrane as well as the premiere of an original, commissioned work — called for more than a base level of contemplation. The first piece performed, Paquito d’Rivera’s Wapango, originally for strings, was played with inspiration and a warm, but eager intensity that clearly displayed how well the ensemble works as a unit. Starting with Paquito, it seems, was a statement; a musician who himself jumps between musical worlds (jazz, classical, Afro-Cuban/Latin-American), Paquito’s piece deliberately prefaced the almost schizophrenic roles the ensemble members would play throughout the evening, each player switching between the conversational interdependency of the string quartet and the distinct, recognizable roles of a traditional jazz quartet.

My Favorite Things, arranged from Coltrane’s masterful rendition by the ensemble’s violinist, Mads Tolling, featured the ensemble assuming the layered textures that made the Coltrane quartet so original. The cellist’s percussive, pizzicato ostinato (taking on both bass and drum-set parts) during the solo section evoked that of the original recording, though each of the players shared the responsibilities of the rhythm section as the violist, Jeremy Kittel, paid homage to Coltrane’s unforgettable melodic interpretation. The two-movement Anika’s Dream, the commissioned work penned by the ensemble’s founding member, violinist David Balakrishnan, featured a canonic opening and virtuosic cadenzas by cellist Mark Summer. These traditional devices were jostled by rhythmic, ostinato-driven vamps characteristic of Coltrane’s era. The centerpiece of the evening arrived after intermission. The quartet set the stage with interpretations of Coltrane’s Moment’s Notice, Naima, and Countdown that, depending on your degree of orthodoxy, paid deference to, or misrepresented, the intentions of the master saxophonist. A Love Supreme appeared in a condensed and concentrated form, with the ensemble playing a summary of, and not so much a commentary on, the musical events and the extra-musical origins of Coltrane’s magnum opus. The simulated jazz-quartet texture was by this time expected, and it remained unclear whether the ensemble was intent on reciting Coltrane’s message in its mother tongue or translating it into their native language. The group paid the work deference, however, with its beautiful playing. Each of the quartet’s members possesses a rich, full, and expressive sound that transcended the amplification. A Love Supreme concluded with the original four-note motif of the opening movement conspicuously inserted in the coda of the last movement, sounding more like a reminder than a mantra. Ultimately, the piece unsuccessfully recreated the magic of the original recording, and that was the point. This was not a séance for a departed legend, but a tight, well-knit interpretation of a moving musical message. The strongest part of the performance was the new layers of musical material added to Coltrane’s original, like commentary that the ensemble collectively voiced with attention and care. The audience congratulated the ensemble with laudatory bravos at the crest of a loud wave of hushed murmurs. The inevitable question remains, which actually splinters into two. How well does music written for and performed by a jazz quartet translate in a performance by a string quartet, and what, then, do we make of that music? Is it still jazz, or has it become something else? Naturally, the seemingly clear boundaries that define and separate genres are once again revealed to be permeable, elastic, and even apocryphal. That blur between boundaries is what one couple in attendance identified as the most compelling aspect to the program — they came to see and hear “a bridge between music, classical and jazz,” an ensemble “trying new things,” and music that, as one of them put it succinctly, was a “crossover.” The Turtle Island Quartet inhabited this in-between space comfortably and successfully, and those who came not knowing what to expect received something all concertgoers should expect: an original and inspired performance.