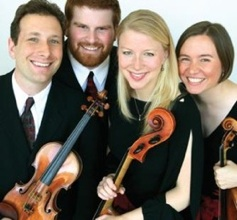 “This piece represents music that I myself would like to listen to,” writes George Tsontakis in the program note for his String Quartet No. 5. “Strangely,” he goes on, “this is not always the overriding consideration for a composer.” Sometimes it feels like new music is written to impress or confound — written to look good on paper rather than sound good to the ear. But more and more 21st-century music is eschewing the prickly inaccessibility of the past century in favor of more readily beautiful music, without sacrificing originality or complexity. This applies to all three pieces that the Cypress String Quartet played in Tuesday’s concert presented by Composers, Inc. at Old First Church in San Francisco.

Tsontakis’ fifth quartet (2006) is a dreamy float down memory lane with two movements that can be interchanged as first or second. Originally commissioned by the Cypress as part of its annual Call & Response program, the call was for some late Beethoven (Opp. 131 and 135), but the response arrived via George Rochberg, who is famous for converting from atonality to tonality, thereby generating controversy in composer-academia; his third quartet draws from the deep well of Beethoven’s last quartets.

Rather than a long-winded preconcert talk, the members of the quartet alternated introducing the work with a few short and sweet words — a detail to listen for, or a personal anecdote. Jennifer Kloetzel introduced the Tsontakis with the part story above and by pointing out the running 16th notes that permeate what was, in this reading, the first movement and that are also prominent in the second. These quick trills represent memory — constantly present, ever-fleeting. Although the perpetual motion is played by all four instruments, second violinist Tom Stone was tasked with driving most of these memory-trills, which he did with remarkable precision and clarity. In the second movement, the first violinist played gorgeous, fleeting lines high up while Kloetzel responded with similar lines so high they’re normally played on the violin’s E string, yet, when played on the cello, they assume a darker intensity.

Second violinist Tom Stone was tasked with driving most of these memory-trills, which he did with remarkable precision and clarity.

Next was Kevin Puts’ 2008 Lento Assai, commissioned by the Cypress to respond to Mendelssohn’s Op. 13 on the 200th anniversary of his birth. Like Tsontakis, Puts bypassed the composer directly mentioned, this time going to the source: Beethoven. Puts picks up where Beethoven left off right before his death, drawing from the transcendental slow movement of Op. 135. He begins with a simple triad and then proceeds to smudge the edges and draw melodies from it, always moving organically. The triad seems to breathe as the Cypress players dovetail their lines and blend their tones in good old-fashioned harmony, occasionally with tasteful dissonance as well.

This is the second time I’d heard the Cypress play this piece. The first time was in a high school in Cupertino (the Cypress gives music students previews before the official premiere). This performance was even more beautiful than the first, given the acoustics of Old First Church, and especially given my memory of this piece from four years ago. The peaceful exploration of the triad halts suddenly with a shocking silence: another reference to Beethoven (who, in turn, learned the trick from Haydn). A new section is ushered in by Kloetzel with an intense jagged melody, answered by even darker sounds from violist Ethan Filner. It feels like a slap in the face after the heavenly opening section.

The brief middle section features a pulsating rhythm, just what the piece needs to keep it alive after all the slow melodies. The second section returns, followed by a shortened reprise of the first section. Stone’s introduction mentioned this “cyclical form” — a direction that clarified the piece and made it easy to enjoy.

After intermission, it was a Call & Response commission, Elena Ruehr’s 2012 String Quartet No. 6, this time in response to Mozart and, yet again, to Beethoven. The composer herself spoke before the performance, also citing Rochberg as an inspiration. Like a typical 18th- or 19th-century piece, this quartet features four completely different movements. The first is a rather matter-of-fact, marchlike affair, subtitled “The Sea,” which feels like a sailing song. The second movement, in eerie contrast, is sad and fearful, written for Todd Donovan, a friend and associate of both the Cypress Quartet and Ruehr, who was dying of cancer while the piece was being written. Donovan recently passed away.

The third movement takes another sharp turn with sultry rhythms and a dancelike feel. The fourth movement is the strongest of them all, reaching the transcendental heights of the first two pieces on the program. The ending is a thrilling chase of upward gestures, alternating colorful and atonal dissonance with clear, straight-up scales for a rousing finish.