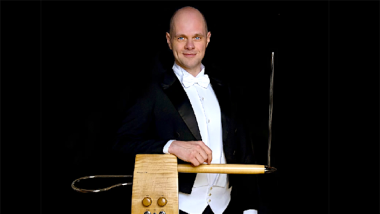 You may want to think twice before entering theremin player Thorwald Jørgensen’s “pitch field.” And worse, knowing when you have isn’t altogether straightforward, as Jørgensen made clear when he demonstrated that even his own breathing is enough to alter the pitch of his fully nonhaptic, electronic, and yet distantly old feeling instrument. Though this means he must hold his breath “for a very long time,” he dismisses the challenge: “With my two hands I make music. Very simple.”

Atmospherically, the theremin evokes that future-that-could-have-been aesthetic, the category of daring, strange inventions that never gained wide currency but crystallize one historical moment’s cutting-edge. Many of these probably best belong in an oddity museum today, but last night at Old First Church, the Friction Quartet joined Jørgensen to make the case for rescuing the theremin from such ignominy, with mixed success.

As Simon Bertrand pointed out in the introduction to the U.S. premiere of his theremin-and-quartet piece, The Invisible Singer, the theremin sounds most like a human voice in much of its middle and upper range, while resembling a cello in the lowest. The technique required to play it most nearly approximates that used on a string instrument, and to get a sense of the challenges of performing precise pitches on it, imagine the difficulty of doing so on fretless string instruments, then add a third dimension. Jørgensen has in fact studied with cellists to hone his craft, and his command of the instrument clearly reflects mastery.

Bertrand’s piece consisted of a series of eight vignettes designed, he said, to prod the boundaries and capabilities of the theremin. The pseudo-waltz and the slow, ascending movement stood out as well-conceived uses of the ensemble, but many of the sections sputtered away before saying much. I suspected Jørgensen could handle much more involved and faster lines, a missed opportunity. Bertrand certainly does not over-compose, an easy trap, but he almost tends in the other direction. Throughout The Invisible Singer, the excellent Friction Quartet players felt underutilized, waiting in the wings for the main event.

Jørgensen’s two original pieces — Distant Shores and Macheo — both employed a loop panel to let him lay down voice and rhythm tracks over which to solo on the theremin. Distant Shores evinced a stunningly realistic imitation of a coastal scene, complete with foghorns (low theremin), waves (looped voice), and seagulls (high theremin). Still, neither piece exploited Jørgensen’s chosen ax very well: both featured pretty, though sentimental melodies over incidental harmonies and token atmospherics.

Remedying the lack of harmonic richness, the Friction Quartet rounded out the first half of the program with Janáček’s String Quartet No. 1, a programmatic interpretation of Tolstoy’s “Kreutzer Sonata” story. It’s a wild, uneven quartet depicting the psychological throes of a woman estranged from her husband and eventually murdered by him for speaking intimately with another man. Janáček — almost comically — marks every movement Con moto (“with movement”) and the Friction Quartet stepped up to the plate and maintained the necessary unabated frenzy, especially in the rip-roaring climax. The quartet begs comparison in some ways — idiomatically and narratively — with Schoenberg’s Verklärte Nacht, although the much longer and denser Schoenberg maintains a more consistently convincing emotional pitch.

The evening found its best stride in its final act, beginning with two pop arrangements for quartet by Doug Machiz, Friction’s cellist. Both breathed air into the room, but the first, a detailed arrangement of Prince’s “Little Red Corvette” really enlivened the night and made me go listen to the original after, amazed all that music had hid itself away in the track. Jørgensen then hopped back on stage and the full ensemble closed out the night with Rachmaninoff’s lovely Vocalise and Alexander Alyabyev’s Le Rossignol. The latter gave Jørgensen his best chance to show off, and the program wrapped by showing that the theremin is, in fact, an even better instrument than the flute or piccolo to bring pitch-perfect birdcalls into music.

Spaced Out and Loving It With the Friction Quartet

The intrepid ensemble explores the fringes of music and the universe with a world premiere and three recent compositions.