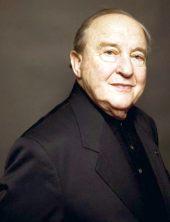 Jerry Kuderna on August 3, 2009
“We are looking for someone who will touch us deeply, in a way that we cannot forget.” These words, spoken by the pianist Menahem Pressler in a documentary about the Van Cliburn competition, came to mind while listening to his solo recital at this summer’s [email protected] Festival. In the course of his recital I discovered just how deeply they were meant. Anyone who has heard his performances as the pianist of the Beaux Arts Trio for a half century remembers his impeccable musicianship and his ability to bring out the most beautiful sounds from his instrument and those of his collaborators. Sunday we got a rare chance to hear him on his own.

The Spring Song by Mendelssohn (whose bicentennial the festival is celebrating this year) is one of the more hackneyed pieces, known to all beginning piano students. If Pressler played it as a sprightly encore, we probably would have smiled indulgently. Beginning his recital with it was almost shocking; and the way he played it, rather slowly as if not missing a single nuance or harmony, was utterly disarming. It was if he was greeting the piano as a beloved friend, enjoining it to accompany him on a journey. The two other Songs Without Words that followed increased the sense of intimacy between performer and audience, and we knew that we were in for something very special.

The dramatic outburst that opens Schubert's late four-hand work Lebensstürme, with Pressler playing treble and Wu Han, one of the festival’s directors, taking the secondo part, sounded a symphonic alert. Both pianists came on with all 20 fingers blazing. Schubert felt he needed lessons to shore up his counterpoint technique during the last year of his life, yet there was nothing dry or academic about this work. It might be viewed as emblematic of the intense activity of Schubert’s short — and Pressler’s long —musical careers. In the midst of all the hurly-burly, there sounds the magical, calming chorale unforgettably intoned by Pressler, invoking a steadfast faith underlying all the strain and effort. It said, “Find peace and joy in the eye of the storm.”

Beethoven's Sonata Op. 110 explores regions of thought and feeling that can, and must, be contemplated over a lifetime. Pressler began the piece gently, but with a firm tone that implied great fortitude. The trills that descended in the bass of the first movement had an intensity that made the floor of the stage shake. Beethoven does away with the usual breaks between movements, despite the fact that the music clearly falls into sections: Sonata Allegro, Scherzo with trio, Arioso, and Fugal Finale. In most performances the sonata comes across like a late Beethoven work in four unconventional, rather rambling, movements. Not so here.

Playing as if Not Playing at All

How does a life in chamber music affect a solo pianist’s work? I needed to know how the practice of listening deeply to one’s colleagues and entering into dialogue with them would show in the way Pressler played the most demanding of Beethoven’s solo works. The lack of self-indulgence in every bar (even those without barlines) showed that his approach might have been similar, if not identical, to both forms of music-making at the piano. The emphasis, of course, was on the musical aspect. This was most apparent in the two great laments, the Arias that are followed by Fugues, which are, as Claudio Arrau once said, not really about playing the piano at all.

Pressler resolved this apparent contradiction by bringing his pianistic prowess to bear without crossing the line between expression and the continuity of the structure. Thus the transitions from one “movement” to the next felt compelling. The transitions from one emotional state to another — from calm to manic activity to profound solemnity to darkest despair to blazing affirmation — seemed to spring from a sense of the music’s meaning and Pressler’s awareness that each phrase exists in relation to all the others.

Schubert’s Sonata in B-flat, his last work for solo piano, concluded the recital. Here, Pressler’s commanding feeling for musical form encompassed the vast reaches of the work. He also showed us that nothing is “simple” in this music and that live performances must embrace the accident. The finger slips in the opening phrase (the last place I would have expected it to happen) were immediately made right in the subsequent repetition ... and sounded even more beautiful. Moral: To err is human, but we must correct our mistakes.

How deeply Pressler knows and loves this music came across even in the most casual moments, as, for example, in the unself-conscious way he caressed the single-line melodies calmly following intense outbursts. His daring use of the pedal in the slow movement mixed harmonies that created an almost unbearable tension. The simple, yet haunting, trio of the scherzo movement with its “wrong” accents made way for the opening of the finale. I particularly admired the forte octaves that punctuate the mischievous theme of the finale, always beginning in the wrong key. Pressler let them ring out, and then at the last moment dampened the sound to bring the listeners closer, inviting them to enter more deeply into a new adventure.