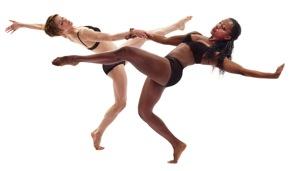 Paul Taylor is 80, and his Paul Taylor Dance Company is in its 56th season, and because of these facts — well, and because of his instantly recognizable muscular yet sunny movement style, his broadly inclusive musicality, and his singular way of seeing the world as alternately bizarre and tender — seemingly everything written about him drives home the dread that we might not have him with us much longer.

The Taylor Company itself has begun to engage in prematurely posthumous-like framing, in the program materials accompanying its latest San Francisco Performances engagement, introducing Taylor as “one of history’s most celebrated artists” and labeling his works with opus numbers. Yet Taylor himself simply goes on making new dances. Over three programs at the Yerba Buena Center for the Arts’ Novellus Theater last week, his 16-member troupe brought us two recent creations.

My favorite by far (which I found absolutely ravishing) was 2009’s Brief Encounters, set to Debussy’s Coin des Enfants, in an orchestration by Andre Caplet. The rich backdrop of a monastery-like hall and costumes of black bikinis and briefs are by the frequent Taylor collaborator Santo Loquasto; the ambiance and the movement draw on the primal lushness of Debussy’s score.

The 11 men and women in this dance are deeply sexual, yet deeply innocent in their sexuality; they skip, prance, snatch at each other as they run through the halls, cavort, dash off again. As usual, Taylor’s structural response to the music is loose and yet rich, because he creates an emotional progression that plays both with and against the score’s. This flock of naughty little lambs is trying to figure out coupling, and a little frustrated by the necessities of it.

Amy Young has a terrific solo holding a mirror, stomping impudently when her paramour tires of her narcissism. Michael Trusnovec gathers three women to him, like the Greek god gathering his three muses in George Balanchine’s Apollo — but then, in a delightful surprise, he gathers three men, Young appears and gathers three women to her, and we are left with the men and women massed like opposing troupes on each side of the stage.

In the next section, an even greater surprise occurs as Trusnovec begins a duet by lifting another man upside down, by his bent knees. Throughout, the men have a wonderful motif of pushing down on one knee, boyish yet powerful. They are slightly dominant in this sweetly randy society. Brief Encounters is a Taylor dance worth seeing many times again.

Three Dubious Memories, brand new this year, would be good to see again too, the better to absorb its mysteries. The music is Peter Elyakim Taussig’s Five Enigmas, with Taylor opting to omit Enigma number two. Cartoonishly percussive, anchored by a ’90s-reminiscent dance beat, it often sounds dated, until the final section when it opens into an almost Samuel Barber–like elegy for strings.

The memories seem to be presented in reverse chronology, and the piece grew on me as the slapstick humor compounded (one slap to the face or kick to the groin per note, no contact actually made), then resolved to surprising solemnity in a kind of “threnody” finale in which all three players sit to watch one another in distraught, surprisingly heart-wrenching solos. Three Dubious Memories has more to reveal, and I hope it will be danced in seasons to come.

Not so for 2001’s Black Tuesday, which anchored Program A: This Taylor toss-off has a lot of filler in its dances, to Depression-era popular songs, and not enough meaningful irony, though it was a treat to see Annmaria Mazzini dependably impassioned in the “Boulevard of Broken Dreams” solo. I do wish the Taylor Company would put the new works on its opening night program; instead, on Wednesday we had 1976’s Cloven Kingdom, as deliciously avant-garde as ever, and 2002’s mournful Promethean Fire.

The latter, set to Bach’s Toccata and Fugue in D Minor, Prelude in E-flat Minor, and Chorale Prelude, BWV680, lay bare the limitations of using recorded music. But that is not Taylor’s fault, and live music would kill almost any dance company’s budget. How I wish some enlightened patron might foot the bill for an orchestra when Taylor and his dancers visit us next year.