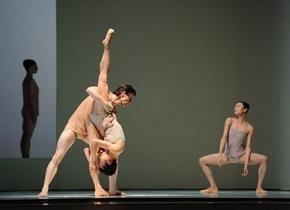 Wayne McGregor’s Chroma made a sensation when it premiered at England’s Royal Ballet in 2006: ticket lines down the block, a swift appointment of McGregor to choreographer in residence, a sudden clamor by companies around the world to commission his dances. But Chroma is making a more tepid impact in its premiere performances at San Francisco Ballet, at least to judge from my own reaction and the audience temperature at Saturday’s matinee.

Perhaps that’s because McGregor’s movement is less startling on SFB’s gutsy, go-for-broke dancers than on those of the far more conservative Royal, whose style is typically controlled, gracious, polite. True, McGregor’s movement is still extreme in any context: Raised on European modern dance, he favors sharp, splayed legs; violent head-jutting; and squiggling spines. He has a special fetish for the feet together in fifth position, the knees bent in plié so that the thighs spread, the back arched so that the butt sticks out. The swift and energetic San Francisco dancers devour such a vocabulary. And yet in Chroma it doesn’t seem put to much meaningful use.

The most interesting elements of the work are its sets and costumes — a bright white room, with a huge cut-out rectangle on the back wall about two feet off the floor, and unisex camisoles and underwear of subtly varying shades of white (slightly green-tinged, slightly pink). Men and women alike had legs shaved so that their flesh picked up the light, and most of the women wore little or no makeup. The dancers sometimes stand in the recessed rectangle while awaiting their entrance — I especially liked how Sarah Van Patten stood there alone, for no discernible reason: a menacing presence we await to bust in from the other “room.” Between wrestling matches, they dash around in an angry stomp.

The music mixes string-driven pieces by Joby Talbot with his own orchestrations of rock songs by the White Stripes’ Jack White III. McGregor’s choreography feels more connected when he’s working with the rock songs; perhaps the strongest section is a men’s trio using the White Stripes’ driving Blue Orchid.

The Talbot pieces are distraught but more treacly, while the steps to them feel arbitrary. But then, the steps feel arbitrary through most of this dance. McGregor has a promising movement vocabulary, but in Chroma he speaks it in words, not sentences (or in meaningful nonsentences). Still, the dancers intoned it forcefully, especially Lorena Feijoo, and Sarah Van Patten in a literally butt-kicking duet with Daniel Deivison. Tiit Helimets, Vanessa Zahorian, Vito Mazzeo, James Sofranko, Lonnie Weeks, and Luke Willis rounded out this cast.

SFB Artistic Director Helgi Tomasson’s 7 for Eight, to various bits of Bach, is a far less ambitious ballet — and yet what a treat it was, particularly with Saturday’s cast. First-year corps member Nicole Ciapponi made a crisp debut in the part originally created for the impossibly swift Tina LeBlanc. Ciapponi could find a bit more style with her hips, but she was all confidence. Ditto fellow first-year corps member Koto Ishihara.

Tomasson has a special choreographic gift for showing off male dancers in gracious yet masculine parts. Hansuke Yamamoto and Weeks were particularly beautiful, while Patten and Helimets lent drama to the ballet’s bookending duets (to the Concerto No. 5’s second and third movements). Pianist Michael McGraw played with unaffected elegance.

A Number and a Nonentity

Friday night, at the opening of Program Seven, SFB gave the world premiere of Christopher Wheeldon’s Number Nine, to composer Michael Torke’s breakneck Ash. The ballet makes geometrically clever use of a enormous cast, and dresses them in daffodil yellow against a bright-blue diorama. The dance really comes alive in a duet showcasing the natural sweetness of Yuan Yuan Tan. Yet like Wheeldon’s Ghosts, which opened Saturday’s Program Six, the choreography seems too packed with invention for its own good.

Truly, the hottest thing going on Programs Seven and Six, which alternate through April 20, is the reprise of the Ballets Russes classic Petrouchka, choreographed by Fokine to Stravinsky’s score. The company gave this bustling, disturbing tale of a taunted and abused puppet an all-out performance Friday. Pascal Molat’s slumped and desperate performance let me finally see that this ballet is about the cruel limits of human empathy, the horror of having your soul denied. The cast clicked around Deivison in his debut as the Moor, terrifically invested in a role many dancers inhabit uneasily because of its discomfiting evocation of outdated racial stereotypes.

The riotously colorful costumes and sets by Alexandre Benois look splendid. The orchestra, under conductor Emil de Cou, gave a thrilling performance of the tempestuous Stravinsky score. Extra kudos to the hard-driven timpanist and an absurdly hard-working percussion section.

During intermission, the audience was abuzz over this ballet created in 1911. Deep artistic daring really is timeless.