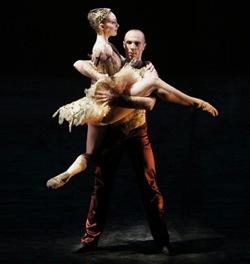 The Royal Danish Ballet hasn’t played the Bay Area in more than 50 years. Tuesday at UC Berkeley’s Zellerbach Hall, the troupe’s new leader, Nikolaj Hubbe (installed three years ago), attempted to make up for lost time by pairing the full two-act La Sylphide with an opener. This was The Lesson, the most famous ballet by former Royal Danish leader Flemming Flindt, a ballet in which an innocent aspiring dancer is put through torturous pointe exercises by a deranged ballet master and ultimately choked to death at the practice barre. It was grippingly performed by the young, leggy, and dramatically gifted Ida Praetorius, with Thomas Lund as her torturer (his anguished face like an Edvard Munch painting) and Maria Bernholdt as his anxious pianist accomplice. It also made a surprisingly apt juxtaposition with La Sylphide.

Because what makes The Lesson enduringly compelling — aside from the tight stagecraft, aided by collaboration with dramatist Eugene Ionesco and composer George Delerue — is its kernel of dark truth about the sadism of ballet toward women: the fetishization of foot-deforming pointe shoes, the physical extremes to which female dancers are pushed, their naive vanity in the pursuit, and the punishing culture of the ballet studio at its most extreme. The movie Black Swan turned these dark side-realities into campy farce. The Lesson channels them into Kafkaesque allegory.

How fitting it was, then, to return from intermission to La Sylphide, the ballet that in 1832 made a star of Marie Taglioni, the first dancer to stand en pointe (with the aid of only heavily darned slippers and her smiling, ethereal will). And how fitting to return for a ballet that epitomized — in fact, helped create — the template of tragedy within the ballet canon: woman idealized, then destroyed.

In La Sylphide, that woman is the sweetly playful white wood fairy who appears to James, asleep by the fire (one of the most charming effects is when the Sylphide disappears up the chimney). James is scheduled that day to marry Effy, but can’t get the Sylphide out of his head. The setting is Scotland, and there are kilts, tartans, bagpipes, group dances with girls in feathered caps. Then along comes the witch Madge, reading palms for the hopeful girls, predicting Effy’s betrayal, which comes soon enough when, at the height of the wedding ceremony, James chases the Sylphide off into the forest.

When James gets there, along with a retinue of other fantasy Sylphide women, he finds the witch Madge again, who gives him a magic scarf by which, she says, he can claim the Sylphide. When James wraps the scarf around the Sylphide, she dies. Meanwhile Effy has married his rival. Headshaking over his foolishness ensues.

So: woman idealized, woman killed, except that the Danish tradition nicely complicates any simple feminist reading. The Danes had a gentler, more egalitarian culture toward women than did the French, who created La Sylphide. And when August Bournonville brought the ballet from France to his homeland in 1836, he overhauled it, pumping up the male dancing, though not with a technique most audiences would recognize as bravura today.

The Bournonville style isn’t high-flying and swashbuckling, like the Russians. The emphasis is on lightness and calm, softly rounded arms above bounding, fluttering little steps — terre a terre (earth to earth), as these petit allegro steps are known. They are incredibly difficult to do well, requiring pliant feet and buoyant rebound, and they aren’t emphasized outside Bournonville training. So, if you want to see what’s distinctive in the Royal Danish dancers, this is what you look for.

We saw it in Mads Blangstrup, a strapping blond rake who turned in beautiful solos, though he cheated his double-tour landings a hair in Act 2. His Sylphide, the American Caroline Cavallo in a guest-artist stint, was top-drawer, too. She reminded me a great deal of recently retired San Francisco Ballet principal Tina LeBlanc, with her sinewy strength and gracious acting, and I especially admired her hands, trembling, always beautifully arranged when still, but never stiff or studied.

The entire company was in great form, especially the stylistically uniform Sylphides and the children in the Act 1 Scottish dances. Yet I found myself focused on the witch Madge, as wonderfully portrayed by Lis Jeppesen, found myself fascinated by her curtain-closing gesture of spitting on James, having helped along his downfall. She seemed to be taking delayed revenge against yet another man who can’t give up fantasy for love — perhaps the kind of man who once spurned her.

And so there is power for women in this ballet, though it comes at the price of being ugly, old, and vengeful. The delicate ways women must wrestle with their representation in ballet culture will surely never cease.

The Berkeley Symphony Orchestra provided an energetic performance of the Herman Severin Løvenskiold score for La Sylphide. They will also play for the Danes in their second program during this Cal Performances engagement, mixing excerpts of Bournonville class work with contemporary pieces by the likes of Finland’s Jorma Elo. More juxtapositions to complicate our understanding of ballet past and future are likely.