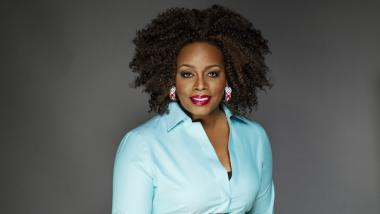 “This is not a stage, it’s a playground,” Dianne Reeves announced in the middle of Thursday’s concert in the SFJAZZ Center’s Miner Auditorium, her opening show in a four-night run. She and her superlative band had just surprised themselves with an abrupt ending to “Christmas Waltz” that left them smiling and laughing, an infectious mood already caught by the audience.

Sharing stories about the songs, Reeves revealed a nasal speaking voice, a pesky cold symptom that was undetectable when she sang. The illness certainly didn’t seem to dampen her spirits as she presided over the evening with the warmth and effortless charisma that’s defined her as a performer for some four decades.

With a shelfful of Grammy Awards and her recent naming as a 2018 NEA Jazz Master, Reeves is the music’s most celebrated vocalist, a direct descendent of Sarah Vaughan and Ella Fitzgerald. But where those jazz immortals made numerous albums that bear witness to their glorious music, Reeves’s magic has somehow evaded capture via the recording process. She’s an artist who fully blooms on stage, and no damn cold was about to rain on her parade.

Alternating between holiday songs from her 2004 album Christmas Time is Here (Blue Note), and her regular repertoire, she seamlessly integrated all the material into an embracing, ecumenical celebration of family and love. Swinging fiercely from the first song, a sleek arrangement of “Carol of the Bells,” she wielded her burnished-bronze contralto with precision and grace.

In a bravura display of sheer jazz virtuosity she soared through the Pat Metheny/Lyle Mays samba-powered “Minuano” with a wordless vocal line that wasn’t so much scatting as aurally dancing with the quartet. Reeves doesn’t perform with her band, she’s part of the band, responding to the musical flow as much as directing it. The warmth and affection between the players spills off the stage and suffuses the audience.

With her longtime pianist and music director Peter Martin, bassist Reginald Veal, drummer Terreon Gully, and Brazilian guitarist Romero Lubambo (who recently won a Best MPB Album Latin Grammy for Dos Navegantes with Edu Lobo and Mauro Senise), Reeves clearly reveled in the company. Her arrangements give her plenty of space to make changes on the fly, and she tailored her original song “Nine,” a loving celebration of childhood, by subtly condensing the concluding sing-song section detailing the games and phrases of preadolescence.

Another highlight was her duet with Lubambo on the Gershwins’s “Love Is Here to Stay,” which she extended with impromptu lyrics celebrating her band as she called them back onto stage one by one. A story about her first Christmas away from home after she’d moved from her native Denver to Los Angeles in 1977 served as an effective set up for “I’ll Be Home for Christmas.”

She closed the concert with an extended version of “The Little Drummer Boy” featuring the imposing Gully, whose simmering funk turned the piece into “The Big Drummer Man.” Delivered with gospel fervor, the unwieldy song never sounded more soulful as she turned those cloying “pa rum pum pum pums” into high-velocity horn-like phrases. The performance was celebratory, sanctified, playful, and utterly singular. In other words, everything a holiday gift should be.