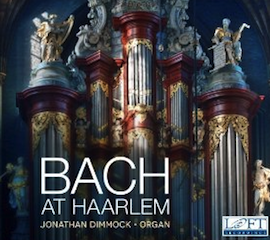 Despite the fact that Bach was himself a great master of the organ, and composed for the instrument throughout his career, gaining his first renown performing on it publicly, most keyboard players (and listeners) today are likely to be much more familiar with his output of more-intimate clavier works for harpsichord, which can be played essentially as written on the piano. Factor in the problems of recording the world’s most complex instrument, virtually an orchestra with virtually infinite combinations of stops, played in acoustic spaces with varying degrees of reverberation, and you have a formidable challenge to both the organist and the listener who wish to discern Bach’s message beyond the massive torrents of sound.

Jonathan Dimmock has taken up the challenge with his CD, “Bach at Haarlem,” issued on the Loft label, played on the Mueller organ built in 1738, an instrument that was so legendary that Herman Melville could not help comparing its thousands of pipes to the insides of his white whale, “with its colonnades of bone so methodically ranged about.” It has 60 stops, three manuals, and a voice that, when fully aroused, seems as if it could wake the dead.

Dimmock begins his recital with one of Bach’s most difficult works, the Prelude and Fugue in E Minor (The Wedge), and at first I felt as if I was inside Moby Dick trying to find my bearings. Our ears need time to adjust to such gigantic sounds that one cannot believe are being generated by a single person. Once mine did, I heard a world of nuance and, as I imagined it being played by the 10-year-old Mozart (what must he have made of the manuals at his disposal? Maybe he used his nose here, as well?) — Bach being completely out of fashion by that time — I began to think of how the organ functions in terms of delicacy and contrast, in addition to overwhelming force.

I began to think of how the organ functions in terms of delicacy and contrast, in addition to overwhelming force.

Bach, in 1738, when the Haarlem organ was completed, had already composed all the pieces on this disc. He never got to the Bavokerk in Haarlem, the Netherlands, and could not try out this organ’s “powerful lungs,” which set the pictures rattling on my walls when Dimmock reached the fortissimo cadence at the end of the D-minor Toccata and Fugue.

Although there is plenty of heaven-storming here on this disc, Dimmock also plays the great Passacaglia and the Fugue in C Minor, interspersing these with shorter works that display the range of color he has at his disposal on the instrument, notably the Chorale Prelude Vater unser im Himmelreich (Our Father in heaven) in the early version, which Bach composed when in his 20s and which displays his genius in its first flowering. Dimmock presents the flowing, highly ornamented lines idiomatically, and he clearly reveals the old chorale themes woven into the intricate contrapuntal texture. I wonder what Bach would have made of the wide vibrato on some of the reed stops. It almost sounded like the instrument was contradicting the current vibratoless style of Baroque singing.

Other delights on the disc include the “Jig” Fugue, a jaunty fugue based on Luther’s A Mighty Fortress Is Our God, and Preludium and Fugue in E (BWV 566), in which Dimmock articulates the Fugue subject in a portamento manner that I found captivating and in a tempo that allow you to hear all the parts in fine relief. My favorite track is the arrangement of the slow movement from the F-minor harpsichord concerto, which is surely on the short list of Bach “greatest hits” but which was unknown to me in this version. It should be recommended listening for all pianists and harpsichordists. It shows that Bach, besides his great contrapuntal mastery, was always concerned with singing lines, which, as with Mozart, made him the true inspiration of that other cantabile composer, Frederic Chopin.