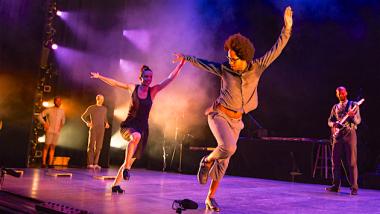 The doubling refers to the technology that’s enabled instant and deferred electronic repetition of tap and its music (E, T, M). The inspiration was ceaseless and glorious. It was nothing less than we’d expect from Michelle Dorrance, a boundlessly energetic, energetically bounding 2018 MacArthur fellow, STOMP! alumna; collaborator with (deep breath here) Savion Glover, Manhattan Tap, and JazzTap Ensemble; creator of commissioned works for Martha Graham Dance Company and American Ballet Theater. And other things, like dancing on Steven Colbert’s Late Show.

Dorrance has also had her own New York-based company since 2011, and seems endlessly receptive to new ideas and brilliant things to do with them, many relating to the brilliant things her eight dancers can do, often inspiring each other. Her associate artistic director, Nicholas Van Young, is a dancer, drummer, composer, and Double Down’s co-creator. He figured out how to turn tap steps on electronic trigger boards into synthesized sound, capture it, and play it back. He thought up showcasing individual dancers, dancing on their boards, on platforms across the stage, creating, he said, “the ultimate dancers’ playground … where you can let your imagination and your feet run wild.”

And wild it was. The first half unfolded at warp speed, turning 45 minutes into what felt like, oh, maybe 10. The short pieces, untitled, were tapped and replicated under Kathy Kaufman’s evocative mood lighting, which came with gently rising fog effects. Dorrance’s brother Donovan, music director and a composer, was in the back at his keyboard. Michelle, a declarative yet graceful force, was the center of attention only infrequently, seemingly loving the ensemble work. Ephrat “Bounce” Asherie, a New York B-girl, dancer, and choreographer, accented the proceedings with her breakdancing. Breaking has major historical and physical connections to tap. Asherie went one-on-one with the tappers, engaging them and showing us the similarities and differences of their moves. In sneakers, she spun like a dervish on the floor; also on her back, her front, her side, her shoulders, her back … wonderful.

The other dancers were rehearsal director Elizabeth Burke; Christopher Broughton; Warren Craft, a lanky, strange yet eloquent presence; dancer Byron Tittle, who’s danced with Janet Jackson and Nicki Minaj; dancer/musician Leonardo Sandoval, who taps with a Brazilian accent, as in samba and more. When not dancing, Sandoval makes jazz music with veteran bassist/guitarist Gregory Richardson. Also aboard: musician Aaron Marcellus, whose beautiful voice — I couldn’t make out the lyrics, but one was a love song — led off the second half of the show with several pieces, narrating an emotional pas de deux by Sandoval and Tittle. All the music — and that includes the tap, the vocals, and the instrumentals played by the company members — was the artists’ own. Dorrance is also a drummer, and she took her turns on the bandstand. The rhythms were so contagious, it seemed as if the audience was itching to join in.

The basics of tap were honored as well — the things still taught in studios around the world, and passed from dancer to dancer, from the shim-sham to the time step, the pullback to the Shorty George, with electronica and without. The group routines and the musical interludes were as compelling as the solo improvisations, arising as they did from what seemed to be a live and breathing thing, an organic whole; choreography, music, rhythm, and a loving esprit. Not surprisingly, Dorrance Dance brought down the house.