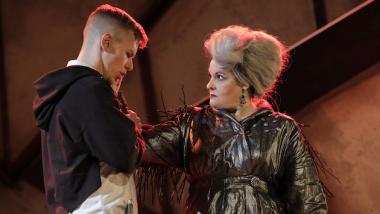 Daunting enough to take on in its original form, Hamlet poses special problems as an opera. First and perhaps foremost is the cultural and psychological dominance of Shakespeare’s text. Anyone who’s read the play and seen various productions of it has some version of the tormented, self-inquiring Dane internally embedded. And even for those who know the play only marginally, Hamlet exists not only as a character but as a kind of distilled essence and archetype of our unsettled, unresolvable natures, at once steeped in language and riven by its limitations. How can music illuminate and enlarge on such a familiar yet mysterious masterpiece?

The knock on Ambroise Thomas’s 1868 Hamlet opera, in a bold but ungainly West Edge Opera production, is that it does little more than decorate Shakespeare’s tragedy. The first of three performances, at the company’s new Pacific Pipe warehouse location in Oakland, didn’t entirely dispel that notion. The score has more than its share of foamy lyricism, martial flourishes, eerie effects, an overweening drinking song for Hamlet and the players, and a hyperextended mad scene for Ophelia (Ophélie in the Michel Carré/Jules Barbier French libretto.) Then, too, there’s the issue of what that libretto leaves out — lots of characters, speeches, and plot points — and how it transforms what remains.

Whatever problems this Hamlet has to overcome, it’s the West Edge Hamlet himself who certifies the company’s choice of this repertoire rarity. Haunted and vulnerable, elegant and peevish, feverish and emotionally ravaged, Edward Nelson is compelling from start to finish. Wandering the set’s industrial-look terrain, he projects an intensely distracted air. Nelson’s lustrous baritone, which can track hair-trigger emotional shifts within a single phrase, is a marvel. Even at a whispery pianissimo, he projects a sense of velocity and momentum across Hamlet’s arc. His ascetic but boyish good looks, set off by the black-and-white hoodie he sports, are another apt asset for the part.

In an early and frankly sexual love scene with Ophélie (the magnetic soprano Emma McNairy), Nelson conveys a mix of passion and detachment. Later on, with Thomas’s orchestral textures giving way to more pointed and dramatically effective support, he takes the listener deep inside the famous “To be or not to be speech” (which comes across with some different language in the English translation subtitles). With the cellos and English horn in plangent accord, Nelson carves out a region of kinetic paralysis that feels Shakespearean to the core. Ending the scene on his back, with a bright silver dagger on his chest, this fine and focused performer punctuates the soliloquy with an eloquent stillness.

While Nelson and McNairy sell their scenes with each other effectively, their stage time is relatively limited. Hamlet’s relationship with his mother, Gertrude (mezzo-soprano Susanne Mentzer), is more searchingly explored, in their volatile and explosive encounters. Mentzer uses her dusky-hued voice and ripe tremolo to capture a character who’s trying to hold back her guilty complicity in the murder of her first husband, Hamlet’s father, and still do what she can for a wayward and difficult son. Gertrude has her own kind of paralysis, which comes across both in Mentzer’s dynamic singing and wary, mine-field acting.

Bass-baritone Phil Skinner sang unevenly as Claudius on opening night, with a notable diminution of power in the second act. Tenor Daniel Curran made the most of his scenes as an impassioned Laërte, whose sister’s descent into madness propels the action toward a strange and ambivalent climax that departs substantially from the play.

About Ophélie’s mad scene, a bel canto showcase that is the longest scene in the opera: McNairy sings it with reckless conviction, her voice purring with childlike innocence and careering into desperate shrieks. But in one of director Aria Umezawa’s over-reaching choices, she and costume designer Maggie Whitaker have contrived a gigantic, tent-like skirt for the scene. In order to carry off the effect of Ophélie swallowed up and drowning in this black fabric sea, the chorus has to tramp around her, even underneath the skirt, to manipulate this costume piece. It’s more busy distraction than theatrical payoff.

The same is true of other design elements. Jean-François-Revon’s set of large skewed panels, some of which serve imperfectly as shadow-play screens for the Ghost (Kenneth Kellogg) and the play-within-the-play, frame the action incommodiously. The set’s warehouse-storage look may chime with Pacific Pipe’s raw interior, but doesn’t serve the opera or the action. Gertrude and Claudius sport spiny quills on their backs, as if to remind us of their animal lust. Just plain weird are the costumes for the chorus, which feature the sort of clear plastic face shields that riot police or workers in some toxic factory wear.

As odd and dissonant as the production may be, Nelson keeps grounding the opera in a felt reality that becomes ascendant in his marvelously musical performance. The dark gleam of his Hamlet gives this West Edge production its glinting shine.

There are additional performances on August 13 and 19.