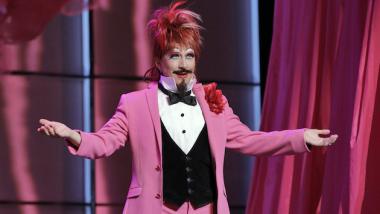 Fortune may be fickle, but Mozart’s reputation has been on top of the wheel for a long time and no amount of spinning is likely to dislodge it. So it’s a good idea to look in on the composers in the great one’s shadow every now and again, if only to better understand the tradition out of which the holy trinity of Mozartean opera buffa was constructed.

West Edge Opera has done us a favor in reviving Vicente Martín y Soler’s L’arbore di Diana (The Chastity Tree), in a bright and vibrant production by Artistic Director Mark Streshinsky at the old Pacific Pipe warehouse in West Oakland and featuring a raft of superior singers. There have been a couple of productions in Spain (Soler was born in Valencia) and one in Minnesota just this year, but if you live in the Bay Area, don’t wait around for another staging.

The opera is pure farce. The details of the libretto don’t matter, but basically the goddess Diana has a tree that will pelt her nymphs with fruit if they so much as have an impure thought. Cupid causes Diana to fall in love with the shepherd Endimione which puts paid to the whole trial-by-tree idea and everyone ends partnered up, including one ménage à quatre between the woodcutter Doristo and three nymphs.

Soler’s music exemplifies the reigning Italian style of the late 18th century. It eschews complexities of harmony, accompaniment, and orchestration. In the terminology of the 1780s, it’s completely “natural”: song is sweet melody and, especially in this pastoral setting, there are no incongruities or stylistic “eccentricities” allowed. From our perspective, this means the music can sound wan and undernourished, although it is certainly entertaining enough for two hours of diversion. But neither in the libretto nor the music is anything really at stake: Diana projects little authority, despite her impressive Act I aria, and Cupid has an immediate answer for every one of her imperious commands. There is no danger, emotional or otherwise — an occasional, minor-key moment of doubt is as far as it goes and magic and flirting is pretty much the answer to everything.

If you want the comparison with Mozart (yes, we’re going there), consider that Diana’s librettist, Lorenzo da Ponte, was writing Don Giovanni at the exact same time in 1787. In the choice of the two subjects lies the difference between the two composers. Nevertheless, it’s worth mentioning that Diana had 65 performances over the next few years at Vienna’s Burgtheater (Don Giovanni achieved 15), had received more than 40 productions throughout Europe by 1800, and was still in repertory in 1813. It vanished, like Giovanni Paisiello’s equally popular Barbiere di Siviglia, with the onset of the Rossinian storm.

To keep things moving, Streshinsky’s production opens with the Sarah Berges Dance Company portraying the animated leaves of the titular tree. (Without my telling you this, you might wonder, briefly, why each green leotard has a bulbous mound sewn to the chest, representing the tree’s fruits.) It’s a nice touch, as is the superstructure of the tree, in Jean-Francois Revon’s design, a platform surrounded by A-frame ladders. The freshest laughs come from costume designer Christine Crook, who thought up an outrageous, novelty-shop-inspired concept for Christine Brandes’s Cupid, when he transforms into a she. The Guy Fawkes whiskers are another nice touch, but let’s not spoil all Crook’s fun by revealing it here.

The quartet of principals in The Chastity Tree was impressive. Nikki Einfeld took on Diana with grace and fine comic timing. The role requires a fair bit of coloratura, particularly in an Act I aria where she lays down the law (sounding just a bit like the Queen of the Night), and Einfeld had the goods to bring it off. Her last aria, and the most emotionally freighted of the show, “Teco porta, o mia speranza” (Take my soul with you, O my hope), was beautifully done.

Brandes was brilliant as Amore (Cupid). She even knows how to vary repeats subtly. She has much more musicianship than this role enables her to show, but she made the most of it, ripping through the recitative with brio. I admired German bass-baritone Malte Roesner’s Doristo, which had tonal beauty and comic energy to spare. Kyle Steagall, as Endimione, possesses a well-trained tenor voice and an easiness of delivery that made him a delight to listen to. Maya Kherani threw herself into the physical comedy and sang gracefully. Her fellow nymphs, Molly Mahoney and Kathleen Moss, and Jacob Thompson as Endimione’s companion Silvio, were all effective.

Streshinsky did his best to work up sexual tension in the various relationships. The jokes in the libretto are standard fare innuendo, so the temptation to fill the stage with extra comic business must have been strong, but Streshinsky, to his credit, mostly resisted, and delivered a clear production, with some romping and simulated sex to help things along. Conductor Robert Mollicone directed a well-rehearsed orchestra in a crisp reading that buoyed the singers.