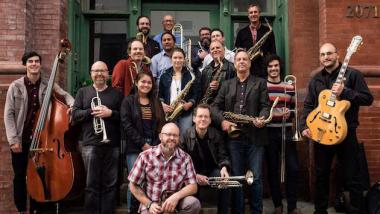 Bay Area big band buffs came out on Sunday night, June 30, to celebrate the release of a new CD from the Electric Squeezebox Orchestra (ESO), the 17-piece big band led by trumpet player, arranger, composer, and educator Erik Jekabson, with members drawn from a deep pool of accomplished Bay Area musicians. The vibe was casual, comfortable, and collegial at the sold-out show at Rendon Hall, an intimate, cozy space at the California Jazz Conservatory (CJC) in Berkeley. The ESO has been a fixture in the Bay Area for quite some time, with a residency at Doc’s Lab in San Francisco from 2014–2018, and the current residency at CJC on Sunday nights that started in March of 2018.

Jekabson warmly greeted the audience and proudly explained that the show would showcase their new recording. Guests artists (all on the CD), included poet, playwright, and multi-instrumentalist Avotcja, and vocalists Madeline Eastman, Kenny Washington, Sandy Cressman, and Kalil Wilson, each with a unique blend of talent that infused the evening with an engaging variety of styles.

Many of the ESO’s members are also accomplished arrangers and composers, and their talents were showcased all evening, along with a mix of rousing and inspired solos on every tune. The band was tight, feisty, and fun, and the camaraderie was palpable as they went through a diverse repertoire of standards and originals, ranging from thoughtful ballads to spirited swing. Jekabson calmly and faithfully watched over and guided the band throughout the show, much like an enthusiastic instructor.

The evening began with “Metaphysical Decision,” a Sonny Rollins tune arranged by trumpet player Darren Johnston, with Avotcja delivering a captivating, rap-like reading of an esoteric poem she wrote about music, backed by a steady swinging beat embellished with punchy rhythmic riffs, giving it a potent and powerful vibrancy.

The mood shifted considerably as veteran Bay Area vocalist Madeline Eastman took the stage for two numbers, beginning with a cool, rhythmic scat on the song “One Finger Snap/Love for Sale,” (on the new CD) with a tight arrangement behind her by one of the band’s trumpet players, Doug Morton. Unfortunately, she was often overpowered by the band, and it was hard to hear her, something that occurred several times with the other vocalists. But on her second tune, “A Face Like Yours,” a slow, sensitive ballad, she demonstrated her ability to take a lyric and tell a story with an engaging tone and earnest emotion.

Another Bay Area favorite, vocalist Kenny Washington came up next, laying down an impressive scat with an incredible range in a fast, syncopated version of “Days of Wine and Roses,” nicely arranged by Morton. He followed it with Duke Ellington’s “In a Sentimental Mood,” featuring a brilliant arrangement by Jekabson that began with a twinkly piano riff behind Washington’s vocals, added a sprinkling of muted trumpets and a spare, mysterious soundscape that grew into a rambunctious swing, and then dwindled back down as it had begun.

Avotcja took the stage again for a rousing reading of “Matter Is.” Composed and arranged by alto sax player Sheldon Brown, the steady drumbeat and deep, tribal-sounding harmonies slowly built tension in synch with the emotional reading of the edgy and provocative text.

The show switched gears again when Sandy Cressman took the stage with a lively Brazilian samba sensibility, displaying her vocal expertise on her own composition, “Como Eu Quero Cantar” (I just want to sing), which is on the new CD. It was arranged by alto sax player Larry De La Cruz. On “Não Me Recorde Não,” she was joined by guest trombonists Jeff Cressman and Natalie Cressman (yes, the same family), and the band once again moved easily from one genre to another, with the audience swaying and swinging along to the infectious Brazilian beats.

Oakland native and lauded jazz vocalist Kalil Wilson came up next for a couple of tunes, starting with one he had written, “The Wind,” a beautiful and sad song he rendered with deep emotion, embellished with a gorgeous orchestral arrangement by Jekabson. He ended with a funky version of “People Make the World Go Round,” also arranged by Jekabson.

Saving the best for last, Avotcja came back out for the final number, “Who’s That Lady,” a forceful and passionate tribute to jazz legend Betty Carter, written by Jon Jang to lyrics by Avotcja, and arranged by Morton. It began with cacophony as the band shouted out “Who’s that lady?” backed by a stirring, restless beat that drove Avotcja’s electrifying delivery. It was a spirited ending to a thoroughly entertaining evening. Electric Squeezebox will be performing at the Monterey Jazz Festival on September 29.

The exuberant ensemble revels in risk with their freewheeling 17-way musical conversation.

Eric Dolphy and Booker Little’s famous gigs together inspire another generation of artists.