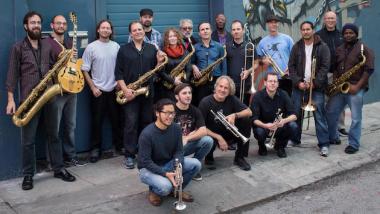 Like watching trapeze artists fling each other through space only to be caught by a comrade on the other side of the big top, a performance by the Electric Squeezebox Orchestra offers an exhilarating spectacle that’s equal parts exacting artistry and nonchalant derring-do.

After a summer hiatus, the 17-piece Bay Area ensemble kicked off a weekly residency at the California Jazz Conservatory’s Rendon Hall on Sunday, and if the band occasionally sounded ragged, that was part of the fun. With veteran tenor saxophonist Mike Zilber taking over the reins from founder and director Erik Jekabson for the night, the ESO focused on original pieces, with several inventive arrangements of classic tunes thrown into the mix.

The band’s vibe was both relaxed and intense, as they tackled complex charts without the benefit of rehearsal. Zilber tailored the arrangements on the fly, talking through each piece and then cuing sections and soloists. They didn’t cut themselves any slack. Kicking off with guitarist Jordan Samuels’s aptly named “Wicked,” the ESO charged through one daunting arrangement after another.

Pianist Colin Hogan, not present on the bandstand but represented by two excellent charts, provided a sly deconstruction of “People Music,” a mid-70s funk-fusion tune by Herbie Hancock’s guitarist Wah Wah Watson and bassist Paul Jackson that featured a tightly coiled solo by trumpeter Ross Eustis and a slow burning tenor statement by Marcus Stephens. Hogan also wrote the evening’s most outrageous outing, a mash up of Juan Tizol’s “Caravan,” Eddie Harris’s “Freedom Jazz Dance,” and another standard I didn’t quite catch. Sort of like a three-legged steeplechase, the piece bucked, tumbled, and surged, kept barely on track by the exceptional rhythm section with Jordan Samuels, drummer Jeff Marrs, bassist Shimpei Ogawa, and pianist Stephen Blum.

Jekabson, the brilliant trumpeter who founded the ESO with trombonist Jeanne Geiger and has kept it going for some five years through a long residency at Doc’s Lab in North Beach and now the CJC, was represented by “On the Move,” which reached a thrilling climax with a pugilistic alto sax duel between Larry de la Cruz and Sheldon Brown. The fact that the band was down one piece — the lead trumpeter called in sick too late to find a sub — didn’t seem to hamper the ensemble balance, though it probably added to the workshop feeling.

Stocked with many of the finest improvisers and section players in the area — saxophonist/flutist Sheldon Brown, bass trombonist Rich Lee, baritone saxophonist Charlie Gurke — the group could simply rely on the firepower of its soloists. But the band has thrived because the world-class musicians are fully invested in trying out and developing new material.

Zilber often kicked off tunes with a note of skepticism, saying something like, “Let’s see what happens.” Maybe it was a clever tactic to lower expectations, but on Doug Morton’s arrangement of Coltrane’s “Bessie’s Blues” and Zilber’s new piece “Another Prayer While Waiting” (inspired by Coltrane’s “I’ll Wait and Pray”), the band sounded magnificent, making micro adjustments mid-flight. “Close enough for jazz” is a phrase musicians often use with both pride and self-deprecation, but witnessing an instantaneous recovery from a mistake is often more impressive (and interesting) than perfection.

A post-Coltrane master who’s fully comfortable in the Trane yard, Zilber traded choruses with Marcus Stephens, the diamond-hard edge of his tenor tone bumping up next to the Stephens’s more pliable sound. Zilber provided another highlight with his tribute to Wayne Shorter, “Weather Wayne,” a showcase for his nimble soprano saxophone work. The set closed with an uninhibited romp through Sonny Rollins’s “Oleo” arranged on the spot.

As the CJC’s resident ensemble, the Electric Squeezebox Orchestra plays Rendon Hall every Sunday through at least November 18. The band invites a student group every week to play a brief opening set. San Leandro trombonist Toby Frager caught the spirit of the proceedings with a program of original tunes, several of which he’d never previously presented. His sextet delivered his hard-bop material with confidence and impressive skill.

All That Jazz in Berkeley

Read all about the program and upgrade at Berkeley’s Jazzschool, a place you really should know about.

Like other smart jazz organizations, the Monterey Jazz Festival is doing its part to develop the next wave of great players like trombonist Calvin Barthel.