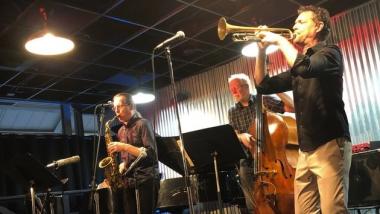 Controversy is too strong a word to describe the long simmering debate in some jazz circles over the creative efficacy of tribute concerts. Many musicians, particularly bandleaders who focus on composing and arranging their own material, bristle at the way some venues and promoters prioritize concerts commemorating iconic, departed stars like Miles Davis, Chet Baker, Ella Fitzgerald, or Dave Brubeck, while offering little support for artists presenting original work. Those same bristling musicians take a different tack when a colleague spends the time to design a thoughtful celebration of an overlooked master, say Herbie Nichols, Melba Liston, Warne Marsh, or Andrew Hill.

If there’s no single right way to offer an homage to one’s heroes, Sheldon Brown and Darren Johnston’s quintet provided a particularly rewarding path at the Oaktown Jazz Workshops on Saturday, focusing on music from a series of epochal live albums by multi-instrumentalist Eric Dolphy and trumpeter Booker Little recorded on July 16, 1961, the last night of a two-week run at New York’s Five Spot. The short-lived quintet brought together musicians who were changing the shape of jazz, with the masterly Richard Davis on bass, Mal Waldron on a neglected piano, and New Orleans drum great Eddie Blackwell, who had gained widespread notoriety the year before when he joined Ornette Coleman’s quartet at the same venue.

Sponsored by Oakland’s Musically Minded Academy, which is settling into new digs around the corner from its original location on Broadway, the concert concluded this season’s well-curated “In the Moment” series presented by veteran sound engineer Jim Bennett (work is afoot to find funding to support a new season in the fall). In a format that felt appropriate for a space dedicated to jazz education, Bennett spent a few minutes before the music started interviewing the horn players about Dolphy and Little.

Part of what makes the three records eventually released from that fateful 1961 date (two titled At the Five Spot and the third Memorial Album) so influential is that they capture a liminal moment when the harmonic and rhythmic conventions that had prevailed for nearly two decades in modern jazz were giving way to more open structures. But Johnston also highlighted the sense of promise and loss that shadow the Five Spot recordings, as Little died three months later at the age of 23 due to complications from kidney disease, the most extreme case in the pantheon of trumpeters with dismayingly abbreviated careers. Dolphy was gone three years later, at the age of 36, due to untreated diabetes and his already vast legacy continues to expand through previously unreleased works like the recent three-disc Resonance Records set Musical Prophet: The Expanded 1963 New York Studio Sessions.

The quintet opened the concert with a forceful version of Dolphy’s searing “Number Eight” that keyed on Brown’s searing alto saxophone moving in and out of unison with Johnston’s brightly swaggering trumpet. The band maintained the same high energy throughout the long set, displaying exquisite control and balance on Dolphy’s quick shifting “The Prophet,” a tune that flirts with dissonance as it seems to change direction every few bars. With pianist Dan Zemelman, bassist Dan Seamans, and drummer Hamir Atwal, the group rendered an influential and volatile body of music with drama, conviction, and the requisite technical finesse, capturing its danger, beauty, and gutsy resolve.

Brown is one of the Bay Area’s creative stalwarts, a player whose presence on a bandstand is a sure indication that something interesting is about to take place. He brings a wealth of experience to interpreting the Five Spot music, including mastery of Dolphy’s three primary horns: alto sax, flute, and bass clarinet (an instrument that Dolphy single-handedly turned into an essential jazz vehicle). While Dolphy led the quintet — the Five Spot is the band’s only known engagement, though Richard Davis, the sole survivor, has said there may have been a few other gigs — Little and Waldron also contributed recently composed tunes to the repertoire. Johnston brought out the trumpeter’s playful side on “Booker’s Waltz” and positively crackled on Little’s “Aggression,” a tightly wound piece that built to a Brown’s bass clarinet duet with Atwal’s graceful trap work.

With Brown on flute doubled by Seaman’s lithe bow work, the quintet played a lovely chamber jazz version of Jimmy Van Heusen’s “Like Someone in Love,” but the set’s tour de force was Brown’s unaccompanied bass clarinet rendition of Billie Holiday’s “God Bless the Child,” a performance that echoed Dolphy’s famous a cappella Five Spot feature. With its wide intervals and vertiginous melody, Waldron’s “Fire Waltz” provided another high point. More than playing the music with familiarity and passion, what made the quintet so effective is that they both evoked the idiosyncratic approaches of the Five Spot players without sublimating their own personalities.