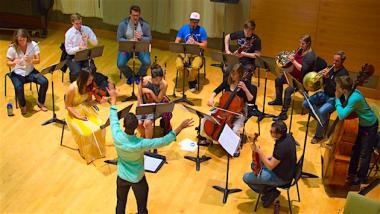 As surely as the fruit hanging closest to the ground is the easiest to harvest, what is easiest is not always best. On Saturday evening at the Center for New Music in San Francisco, members of Elevate Ensemble took this point to heart: In a sold-out chamber music program called “Low Hanging Fruit,” the musicians hypothesized that, when it comes to modern music, sometimes the most difficult music sounds the sweetest.

The evening opened with a quartet composed in 2015 by a Bay-Area composer, Michael Gilbertson. Scored for the so-called “Messiaen quartet” of clarinet, violin, cello, and piano, his piece is also called Low Hanging Fruit. But Gilbertson drew inspiration less from the aforementioned idea and more from the biblical idea of temptation in the Garden of Eden. Gilbertson explained that a recurring pitch in the piano helped to represent this idea. Rhythmic strings often reinforced the piano, and noodling clarinet lines conjured, for me, Eve’s fateful snake. Unlike the biblical tale, this witty work did not culminate with a catastrophic downfall.

When Chad Goodman, Elevate’s charismatic artistic director, introduced Mirror Study, he explained it wasn’t virtuosic in the sense of a soloist playing an unfathomable number of notes. Mirror Study is like a solo that two percussionists perform in tandem on a single vibraphone. Being situated on opposite sides and opposite ends of the instrument meant that one of the performers was playing it upside-down. Divesh Karamchandani and Elizabeth Hall demonstrated the difficulty of playing in perfect synchronicity. Even though it was hard to see in the cozy space, this innovative piece — by So Percussion’s Eric Cha-Beach — was both musically and visually stunning.

Another spectacularly virtuosic work was Vez (2005), a work for unaccompanied cello by Ana Sokolović. The composer is Serbian-Canadian, and “vez” means “embroidery” in Serbian. The piece stitches together a number of short, organically developing segments. Soloist Evan Khan mastered this work’s irregular and complex rhythms, which are informed by Balkan music, to convey its frenetic outbursts that often evolved into spurts of distressing lyricism.

The evening ended with Contrasts, a trio in three movements by Béla Bartók for violin, clarinet, and piano. The first movement, “Verbunkos” (“Recruiting Dance”), sounded like a theme and variations, with the melody chiefly in the clarinet. In fact, Bartók wrote the piece for violinist Joseph Szigeti, who wanted a piece to play with his famous friend and clarinetist, Benny Goodman. Goodman’s legacy was in capable hands on Saturday, and Carlos Ortega especially rocked the cadenza with which the first movement culminated.

As Goodman noted, the title of the uncanny inner movement, “Phineo” (“Relaxation”), is misleading. This dark, atmospheric music was relaxing only insofar as it lacked the relentless, dance-like drive of the outer two. This drive returned in “Sebes” (“Fast Dance”), which opened with violinist Mia Nardi-Huffman playing on a second, alternately tuned violin (a technique called scordatura). Later in the finale, it was Nardi-Huffman’s turn to vanquish a demanding cadenza.

As the title of Bartók trio suggests, this entire program was a creative smorgasboard emphasizing various definitions of virtuosity. Elevate Ensemble’s musicians performed these taxing pieces with relaxed, almost understated panache. A concert of deliberately difficult works is a curious — and courageous — programming choice, one that left me eager to hear these musicians again soon.