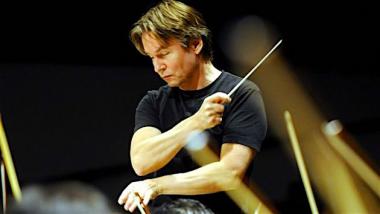 Even the LA Phil Can’t Rouse The only one

While Saturday evening’s Los Angeles Philharmonic performance featured Dutch composer Louis Andriessen’s latest work, The only one, which had received its world premiere with the LA Phil on Thursday, it was clear that the audience had arrived for the stars. Pianist Emanuel Ax and conductor Esa-Pekka Salonen thrilled the audience with Mozart’s Piano Concerto No. 22. Salonen is the former music director of the LA Phil, and it is clear that he understands the ensemble and the acoustics of Walt Disney Concert Hall. The audience received him warmly.

The concerto is pure mid-career Mozart, written several years before Mozart’s more experimental pieces such as The Magic Flute. The reduced ensemble size of the Los Angeles Philharmonic fit beautifully into Salonen’s hands as he delivered a restrained and subtle account of the concerto. It was not over the top, as many contemporary conductors tend to make Mozart.

Ax’s playing fit Salonen’s interpretation. The piano cadenza in the third movement proved to be the highlight of the piece. Ax has an ability to shift the instrument’s tone from moment to moment, which allows him to differentiate the sound within a single line of melody. While many pianists attempt this level of control, it seemed effortless for Ax. It added a layer of pathos that was welcome in this otherwise bright and upbeat work.

Salonen blended the orchestra well with the soloist. At times, the piano and violins were brought together in unison with remarkable clarity. The San Francisco Symphony will be lucky to have Salonen as their new music director in the coming year.

The programming of Mozart’s Piano Concerto No. 22 before Beethoven’s Symphony No. 1 provided insight into the musical world of Vienna in which Beethoven learned to compose. The two composers shared the same influence in Haydn, Beethoven’s teacher and Mozart’s (probable) mentor, and the connections are perhaps never as apparent as they are in early Beethoven.

The first two movements of this Beethoven symphony are especially reminiscent of Mozart, as the young composer searched for a unique voice before finding it in the rocketing third and fourth movements. Salonen drew aggressive playing from the orchestra in the final two movements, with outstanding horn and string playing. The work’s solo timpanist provided controlled explosions that set the work apart from the Mozart piece. This was as strong an account of Beethoven as I’ve ever heard the LA Phil perform.

The world premiere of renowned composer Louis Andriessen’s The only one (2018) felt odd on the program with Mozart and Beethoven. The piece, featuring the sing-song vocals of Nora Fischer, never found its footing.

The only one was presented with episodic text projected above the stage, although the singing was in English. Using words from Belgian poet Delphine Lecompte, the narration describes various encounters with the wind, a lover, a mother, and an old woman, among others. Seemingly random lines such as “Grains of sand and used condoms are spat in my face” were often shouted above the music, while Fischer changed outfits onstage and walked in between stands of the orchestra. These nonmusical theatrical choices fell flat and seemed unrelated to any narrative within the work: They felt random.

In his program notes, Andriessen described his enthusiasm to compose the piece because he had no restrictions on instruments from the orchestra. And yet the presence of nontraditional orchestral instruments, such as electric guitar, bass guitar, and marimba did nothing to enhance the soundscape of the work.

The piece jumped from genre to genre — at one moment a Viennese waltz, at another a minimalist keyboard piece in the style of Philip Glass — with seemingly no musical threads to connect the music. Moreover, the music itself seemed unrelated to the text, which seemed unrelated to the theatrical acting. While moments of the work appeared engineered to feel shocking and avant-garde, they never delivered a punch. The work was the only piece on the program not to receive a standing ovation and only received tepid applause, despite the presence of the composer.

John Adams, Yuja Wang, and the LA Phil Give the Devil His Due

The premiere of Adams’s new piano concerto is devilish fun.