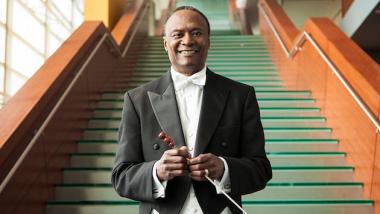 Thomas Wilkins can usually be found in L.A. backing various pop and rock acts as principal conductor of the Hollywood Bowl Orchestra, whose role in the great outdoors has been marginalized in recent summers. He deserves a better showcase, and over Presidents Day weekend, he got it — two programs with the Los Angeles Philharmonic in Walt Disney Concert Hall of mostly underperformed music that was related to the Harlem Renaissance.

While  the Phil shouldn’t have to use Black History Month as an excuse to program music by William Grant Still, Duke Ellington, and George Gershwin indoors, we’ll take it and hope that it leads to more performances from this repertoire elsewhere on the regular calendar.

The second of Wilkins’s concerts, Sunday afternoon Feb. 17, burrowed somewhat deeper into the catalogues of Ellington, Gershwin, and Still than the one the night before, and also included a world premiere by the veteran African-American composer Adolphus Hailstork. Three of the four works were new to the LA Phil, yet not surprisingly, this quick-study orchestra played them splendidly, with the jazz the blues inflections smoothly and idiomatically handled.

Three Black Kings, a proposed ballet that was meant to be a eulogy for Dr. Martin Luther King, Jr., was one of Ellington’s last pieces, and he didn’t finish it. It was up to Ellington’s son Mercer — also a composer — to conjecture how to complete the work;, then Luther Henderson orchestrated it and Maurice Peress re-scored it for symphony orchestra. The results leave doubt as to how much of this 17-minute work is true Ellingtonia. Many of the voicings in the arrangement didn’t sound much like those of the Duke, neither did the hammering mallet percussion opening. But then, Ellington was always growing, always absorbing then-new developments like the bossa-nova groove that shows up in the middle of the work, so who knows? In any case, the LA Phil’s rhythm section was expertly driven by two distinguished guests, the great jazz drummer Peter Erskine and Alex Acuna on congas.

Gershwin’s Second Rhapsody — whose scarcity on most concert stages borders on the criminal — received a performance that can truly be called revelatory. Wilkins took a slightly slow tempo that revealed acres of deliciously complex inner lines in the Disney Hall acoustics, showing how far Gershwin had progressed from his far-more-famous Rhapsody in Blue. Unlike his freewheeling improvs in Rhapsody in Blue the previous night, pianist Aaron Diehl pretty much stuck to the score this time, and did a fine job with it. The strings really sang out the New York-centric central theme, and — ooh! — how the LA Phil got the most out of those massive, wonderfully urbane, world-weary chords at the end of the piece. I’d take this Second Rhapsody over the first one anytime — and Diehl followed the thunderous ovation with Ellington’s thoughtful “Single Petal of a Rose” as an encore.

Given the emphasis on Still this weekend, the title of Hailstork’s piece, Still Holding On, was a clever pun, but the composer explained the real meaning was that in these times of stress and struggle, all we can do to cope is just “hold on.” A beautiful sustained chord launched the piece, with lonely clarinet, cello, and bluesy alto sax solos to follow. Suddenly, things erupted into real trouble with a clang and agitation from everyone, and there would be further turmoil until the piece ended without resolution, leaving us holding on. Consoling this piece is not.

With Still’s Symphony No. 4 (“Autochthonous”), which follows a similar template as his more famous Afro-American Symphony — traditional four-movement symphony with a soulful slow movement and a jaunty Scherzo delivering the strongest jazz influence — we see that Still may have been the most faithful follower of Dvořák’s advice. The Czech composer urged his American counterparts to develop their own classical music from African-American and Native American sources, and Still was only too happy to use both here. Everything cohered in Wilkins’s concept, right to the optimistic chorale at the end. There is a catalogue of about 290 Still pieces in many genres — some with very provocative titles — begging to be played and, again, we shouldn’t have to wait for Black History Month to hear some of them.