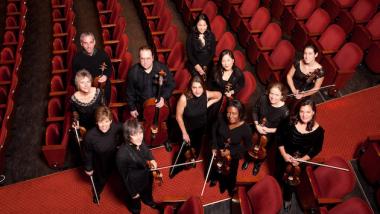 This Evening in Paris Is Sublime

From French fascination with jazz in the 1920s to American regard for Paris as the quintessential city of love and light, these two countries have long captivated one another. Their fertile reciprocity stood center stage this weekend when two acclaimed Bay-Area ensembles joined forces to present “Americans in Paris,” a program of works written by French composers and also American ones with ears pining for Paris. Like a tasty French pastry, this collaboration between New Century Chamber Orchestra and the vocal ensemble Chanticleer was an absolute delight.

Saturday’s performance happened at San Francisco’s Herbst Theatre, though there were three additional performances on adjacent days in other Bay-Area locations. Under the leadership of music director and violinist Nadja Salerno-Sonnenberg, the string orchestra, alone initially, set the mood by performing an arrangement of Erik Satie’s Gymnopédie No. 1. Satie’s pensive piano classic is as old — and probably as iconic — as the Eiffel Tower. Gerard Schwarz’s arrangement provided an invigorating coat of fresh paint.

Additional orchestra-only pieces included music from Stravinsky’s ballet Apollo, the final movement of Albert Rousell’s Sinfonietta, and a suite from George Gershwin’s An American in Paris. Notably, New Century is conductorless — Salerno-Sonnenberg leads qua concertmaster. Especially during the Gershwin, watching these musicians play together so cohesively via (usually) subtle movements and effective eye contact was simply a joy.

Chanticleer — an inimitable, multiple Grammy-winning, all-male a cappella chorus —performed pieces on its own, too. The vocal group first emerged for Ravel’s Trois Chansons. Ravel was a master of orchestration; Chanticleer is, too. The group’s twelve members are equally at ease singing as soloists and as an astoundingly seamless ensemble. Ravel’s songs showcased this versatility, spotlighting at times individual singers (particularly in the second number, Trois beaux oiseaux du Paradis) and, at others, the vibrancy and virtuosity of the whole ensemble (such as in Ravel’s final Ronde).

Additionally, Chanticleer performed four cabaret songs specifically arranged for the ensemble by Evan Price, a Bay-Area-based composer and violinist. Another Chanticleer-only gem was Saint-Saëns’s Sérénade d’hiver. By conveying the work’s scenario of men serenading a woman outside her window, the singers and audience alike reveled in the work’s whimsical, alliterative texts.

While all pieces were enjoyable and refined, arguably the evening’s highlights were when New Century and Chanticleer performed together. They first did so in Fauré’s Pavane, arranged by Chanticleer’s music director, William Fred Scott. Supported by New Century’s graceful strings, the many timbres of Chanticleer washed over everyone like a welcome warm rush of blood to the brain.

Long before this weekend’s Pavane, the two ensembles first collaborated in 2014. Their initial partnership owed some of its success to a medley of tunes arranged for that particular program by Clarice Assad, a Brazilian-American musical polymath. Repeating this formula, Assad arranged New Century’s American in Paris suite. She also created medleys for strings and choir that punctuated each of the program’s two halves.

Songs in Assad’s first set included “Musetta's Waltz” from Puccini’s La Bohème, which transported listeners to a bohemian, 19th-century Paris. It concluded with an ardent rendition of Offenbach’s “Infernal Galop” (aka “Can-Can”) from Orpheus in the Underworld. Of course, Offenbach’s original version is exclusively orchestral. But Chanticleer bills itself as “an orchestra of voices,” and indeed, the vocalists were a robust force in this closing tune. (I had half-hoped the men would form a chorus line and commence kicking, but probably both the heavy musical demands and their long coattails precluded this.)

Based on tunes by Cole Porter and Gershwin, Assad’s second medley concluded the program. It encased numbers such as “I Got Rhythm,” “Embraceable You,” and ultimately, “Strike up the Band.” Even after two hours of music, the audience asked for an encore, and this string/vocal “band” obliged by playing the last tune once more.

Although Salerno-Sonnenberg is departing New Century after this season, I hope these two ensembles will pair up again soon. While each is a powerhouse in its own right, together they are spectacular. In fact, my only complaint of the evening was that it left me inexplicably craving a buttery, flaky croissant.