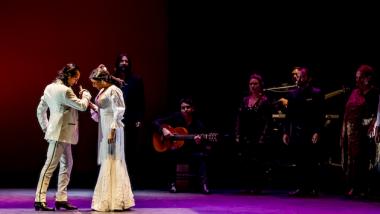 The flamenco hurricane that is Farruquito stormed through Zellerbach Hall on Monday, Nov. 4, leaving 1,500 fans in blissful smithereens. Famed since childhood as the scion of the Andalusian Farruco flamenco dynasty, the 37-year-old Farruquito (Juan Manuel Fernández Montoya) learned at the feet of his late grandfather, Antonio Montoya Flores “El Farruco,” and made his stage debut on Broadway at the age of 4. His reputation — truly, his legend — precedes him, and he more than lived up to it in Farruquito, his first show at Cal Performances since 2003.

When a gifted person is born into an art form, it becomes a way of being in the world. That is true for many flamencos and flamencas, but Farruquito is a special exemplar. His instrument is not his feet, miraculously precise as they are; nor his hands and fingers, which he flattens, flexes, snaps, curls, and unfurls. He accesses his entire body — slaps his chest and thighs, whips his head and hair, drags and stomps and slides his weight to manipulate the echo of the wooden floorboards, or stands stock-still and waits for the spirit to move him again.

The conceit of the show and the container for his savage energy, such as it can be contained, is flamenco as the expression of Roma life. The musicians and singers sit around a large wooden dining table, and Farruquito and dancers Gema Moneo and Antonio Moreno Fernández “Polito” (also the group’s percussionist) perform vignettes interspersed with vocals, clapping, and instrumental solos, all dramatically lit by Oscar Gomez de los Reyes.

In flamenco, music and dance are not an ongoing conversation; they are inhalation and exhalation — they create each other perpetually. So whether one can discern Farruquito’s seguidilla Alegría from his taranto Zapateo — and in the abstracted format of Farruquito, the boundaries between one form and the next are not explicit — one feels their essence. Polito and guitarist Yerai Cortés lock their eyes on the dancers, but who is cueing whom? Improvisation mingles with choreography, but which is which? Flute solos by Juan Fernández Gálvez “Juan Parrilla” add a paradigm-shifting prog-jazz feel, counterbalanced by the traditional aching vocals of Ezequiel Montoya Jimenez “El Chanito,” Mari Vizarraga, and Maria Mezcle.

Farruquito’s mastery is such that he turns mishaps into improvised choreography. When one of Mezcle’s large earrings fell off mid-verse, Farruqito lunged low and picked it up, then stood and extended it back to her ear with a chivalrous grin. It fell again and she caught it, tucking it into her bodice without missing a syllable.

In a downlit solo, Polito played a cajón (box drum), beating the top, front, sides, and seams with open and closed hands, then stood on it and stamped his heels; armed with a wooden cane in each hand, he and Farruquito squared off in a rhythmic duel. But for all their fireworks, they were nearly outdone by the magnificent Moneo, and not only because she wore the frilly-trained bata de cola gown, which she kicked this way and that, hugged to her body, and lifted to reveal birdlike legs possessed of improbable power. More than anyone else, Moneo was immediate, breathtakingly present, devouring the moment.

If Farruquito has a flaw, that is it. With artists of this caliber, one wants to experience them at their most spontaneous, their least self-conscious, the least restrained by contingencies of performance time and venue rules. In a show whose conceit is the authenticity of everyday life, the mediated nature of a concert format is anathema. Moneo fully transcended it, as did the full-company curtain calls, where even the motherly Vizarraga gave a dance solo. The essence of flamenco isn’t measured perfection, it is the artist’s bared, vulnerable soul.

In Search of Duende: Flamenco in Southern California

A full slate of upcoming concerts reveals a flourishing scene for the passionate art form.

Flamenco’s most-prominent guitar artist, known as Tomatito, performs with his Sextet a stunning program of contemporary music for the art form.

Whether classical flamenco or modern dance-influenced styles, it’s all in the family in Carolina Lugo’s and Carolé Acuña’s company.