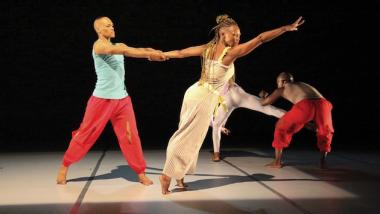 Choreographers and venues worry a lot about how to draw more audiences to concert dance performances and how to combat the stereotype that dance is inaccessible, inscrutable, and stuffy. New York City Center’s annual Fall for Dance Festival has the blunt answer: Just make it affordable, relatable, and relaxed. Founded in 2004 as an audience-building endeavor, Fall for Dance presents eclectic mixed bills of top-tier and emerging talent from New York City and around the world; tickets are just $15 and the decorum calls for whooping, whistling, and cheering.

The formula has worked so well that scoring tickets is a competitive event, entailing getting up early on a summer Sunday to join an online queue in order to receive a randomly assigned number (I was 3,345), and pray that there are still tickets when your turn comes up. This year’s festival comprised four unique programs and eight performances in the 2,257-seat City Center Mainstage Theater, and all 18,000 tickets sold out within hours.

The random ticket queue ensures a cross-section of the New York populace, and on opening night, Tuesday, Oct. 1, men in suits rubbed elbows with off-duty dancers in skinny jeans and high-tops – they may not cross paths at any other shows during the season, but at Fall for Dance they’re one big, happy, hooting, hollering family.

Delgadillo was lovely and lyrical, but Hammans was spellbinding. Commanding a contemporary dancer’s liquid transitions and the antigravity isolations of a B-boy, Hammans turns inside out as he whips, bends, stretches, and flexes in sync with Owen Belton’s noise score. When Strong says, “This is your heart hitting the floor,” Hammans bounces his forearm on the stage in super slow-motion; that choreographic choice could seem on the nose, but the wonder of a superlative artist like Hammans is that they imbue the simplest movement with revelation.

In the U.S. premiere of Rise, Vuyani Dance Theatre brought a message of hope from Johannesburg, where Gregory Maqoma’s company inspires South Africa’s youth through dance. Set to a medley including Drake’s “God’s Plan,” Billie Holiday’s “Strange Fruit,” and Labrinth’s heartbreaking “Jealous,” Rise showcased 11 dancers in a marvelous fusion of African, hip-hop, contemporary, and ballroom styles. Maqoma’s staging brings the vignettes together in a nonnarrative story that flows from full-ensemble rhythms to spikes of solo movement and duets set under pools of downlight.

American Ballet Theatre principal dancer Copeland performed a five-minute solo commissioned by City Center from choreographer Kyle Abraham, whose accolades include a Princess Grace Award and choreography fellowship, and a MacArthur “Genius” Fellowship. Ash was a daring turn for Copeland, with its avant-garde score of plucked and staccato-bowed strings by Ryuichi Sakamoto and Alva Nota with Ensemble Modern. The connection between the music and her undulating momentum, high extensions, and flashes of footwork was tenuous, but the audience adored her all the more for taking the risk.

Beatboxer Chris Celiz provided the soundtrack for seven dancers in Caleb Teicher & Company’s Bzzzz, a witty, high-octane mashup of tapping, Appalachian clogging, jazz, and contemporary — also commissioned by City Center. The chemistry among the collaborators brings Bzzzz to life as they come and go from the stage and a whirlwind of combinations, playing with the percussive potentials of the loud wooden tap platforms versus the sound-damping, marley stage covering. Teicher may be the star, unmistakable with his wild, white-streaked curls, but the moment belonged to Jabu Graybeal, whose frenetic solo opposite Celiz dispenses with Bzzzz’ cheery cuteness and felt raw, soul-stirring, and real.

The choreographer maintains curiosity and delight even when tackling challenging subjects.

A Ballerina Triumphs, A Barrier Breaks