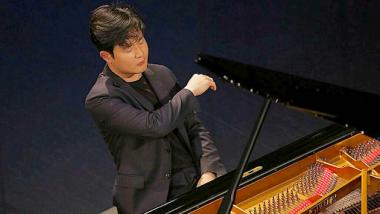 A San Francisco Ballet performance often doubles as a musical concert: the company boasts its own world-renowned, Grammy Award–winning orchestra, led by Music Director and Principal Conductor Martin West through works by composers from Bach and Phillip Glass to Ezio Bosso and Thom Willems.

This season’s Program 3 (Feb. 13–23), dubbed “Dance Innovations,” could be interpreted as a concert accompanied by dance. The central piece in the triple bill is the world premiere of The Big Hunger, choreographed by Trey McIntyre to Prokofiev’s 1923 Piano Concerto No. 2 in G Minor, a thrilling 35-minute work that requires a pianist of rare skill to execute. Superstar pianist and 2017 Van Cliburn gold medalist Yekwon Sunwoo has assumed the mantle, and will perform live for all seven performances, making Program 3 an engagement of unusual duration for Yekwon and a spectacular treat for ballet patrons. (Program 3 also includes Edwaard Liang’s The Infinite Ocean, with an original score by Oliver Davis, and Harald Lander’s Études, set to orchestrations by Knudåge Riisager.)

The performances mark the 30-year-old Yekwon’s first collaboration with a ballet company as well as his performance debut with the concerto, although performing Rachmaninoff’s Piano Concerto No. 3 in the Van Cliburn competition finals served as preparation of sorts. But the good-natured, adventurous, and exceptionally gifted Yekwon is more curious than unnerved, as he explained in our phone interview from Berlin, where he lives.

As a concert pianist, what is it like playing for dancers?

I’ve played for the Northwest Dance Project in Portland, Oregon; they’re contemporary dancers. I played the whole set of 24 Chopin Preludes, and they had four choreographers working on each set of six preludes. We had quite a few rehearsals, and depending on my tempo changes and some of the rubato — if it’s too fast, the dancers had to try to catch up, or I would slow down. Doing that, I grew more into the music. I fell in love with the preludes even more. Somehow, by seeing them doing the dance, it brought out more emotions as a pianist. But for San Francisco Ballet, I’m really curious. This will be maybe somehow easier, because Martin West will be able to watch the ballet dancers, and according to what he is doing, we can adjust the tempo, dynamics, and everything.

With a Tchaikovsky ballet score, there’s a lot of freedom to change the tempo based on the dancer’s preference. How much interpretive freedom do you have with a piece that’s not composed for dancing?

We will have to explore when we get together [to rehearse]. When I worked with the Northwest Dance Project, it was all piano solos, so I had much more freedom. If the dancers were out of breath, I would linger a little longer. But with this concerto, there is a whole orchestra behind [the soloist], so it could be more challenging. At the same time, I completely trust and rely on Martin West. In that sense, it might be somewhat easier.

You keep saying “easier,” but this particular piece of music is said to be one of the most difficult piano concertos to play.

If I think about the most difficult concertos, I would choose this one and also the Rachmaninoff Piano Concerto No. 3, which I played in the Van Cliburn final. For me, technically, this one is more challenging. This one requires a lot of jumping up and down [the keyboard] with both hands. If you listen to the beginning of the last movement, maybe 10–15 seconds, both hands are bouncing back and forth in other directions, and it’s quite difficult to nail it.

How can you play this music, which seems to require so much concentration, and also pay attention to what Martin asks you to do to modulate for the dancers onstage — especially given that there will probably be a few different casts, and you may have to modulate differently for each cast and performance?

The challenging part is the rehearsal with the dancers — how to change the tempo, and especially in this one — in the first movement — there’s a quite long cadenza for solo piano. For that, I’m guessing I will have to change a lot of, not necessarily the dynamics, but the tempo and some of the climactic points — how much time I’ll take getting into it, or how much force I will push into it. It will be fun. I like being more flexible. Being flexible helps any artist to be refreshed. It opens up a lot more layers. But definitely technically, it’s very, very, very challenging.

Have you played the Prokofiev concerto before?

I worked on it in maybe 2008 or 2009. But I haven’t actually played it in public, so this will be my first time. It’s one of a few concertos I really love and have strong emotions about.

What about it is emotional for you?

Right from the beginning, there is this loneliness, and then very dark emotions throughout. I smile a lot, so I look like a happy person, but somehow I’m more checked into something darker. I won’t say depressing, but something like the dark side. I think that speaks to me more. Prokofiev wrote the concerto with the devastation of a friend who committed suicide [in mind]. The whole piece has a certain loneliness, especially when the piano plays the slow, lyrical sections. Lots of people think of Prokofiev as sarcastic and a little violent. Of course, there is sarcasm, but it cannot be compared to any other music. It doesn’t sing out passionately like Rachmaninoff, but the lyrical sections are somewhat more somber, and it sinks deeply in your heart. That’s one of the reasons I find it powerful.

There’s an interior turbulence to it that is very different from Rachmaninoff.

Yeah. Prokofiev’s Third Piano Concerto is somewhat more lively, and more upbeat. But this concerto has so much darkness to it.

Have you spoken to Trey?

No, not yet. We have a week, or a week-and-a-half, [to rehearse] before the first performance. We’ll manage.

You’re all just going to have to dive in and go for it. That can make a performance extremely exciting to watch, not because you’re fearing or looking for mistakes, but because everyone has to be so present.

You’re playing in all seven performances, and on Saturday there’s a matinee and an evening, so you’ll be performing the concerto twice in a day.

I probably should nap in between [laughs]. On a concert day, I rest for half an hour; even if I don’t fall asleep, I let my whole body relax. And before the actual concert, I don’t play much. But for the Saturday, I’ll have to take a long nap. The piece is one of the ones that requires so much stamina. It’s not that long, but it has four movements, and it requires lots of strength. For that reason, to play this many concerts will be another challenge, but I think more than anything I’m just really excited and looking forward to it.

Yekwon Sunwoo Woos Audience With a Champion’s Technique and Expression

The pianist talks about her upcoming concert with Terry Riley and reflects on the transformative power of a life immersed in music.

Jon Nakamatsu on Balancing Fatherhood and the Concert Stage

The pianist chats about the joys and challenges of keeping his roles as performer, pedagogue, and parent in perspective.