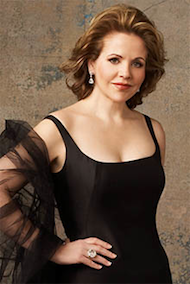 Debussy’s 150th birthday received surprisingly little attention in the Bay Area during 2012, but this week’s program by Michael Tilson Thomas and the San Francisco Symphony celebrates the composer in fitting, albeit slightly belated, style. Wednesday night at Davies Symphony Hall, the conductor and his orchestra introduced a program bookended by two of Debussy’s great orchestral works, Jeux and La mer. In between, the evening’s principal draw was soprano Renée Fleming, whose performances of French vocal works — Debussy’s “C’est l’exstase” from the Ariettes oubliees, in a new suite of orchestrations by Robin Holloway; and selections from Canteloube’s Chants d’Auvergne – lent the evening a special luster. The program repeats through Sunday afternoon; Fleming’s fans and Francophiles shouldn’t miss it.

Thomas and the orchestra have performed this music before, although Jeux has been absent from the Symphony’s repertoire since 2006; La mer was last performed at Davies Hall in 2010. (These are the first performances of Holloway’s settings, completed in 2012 on commission from the San Francisco Symphony.) Yet the conductor and his ensemble, sounding refreshed and energized after the holiday break, approached each work with newfound vigor.

The rewards came immediately, with the opening performance of Jeux. The prosaic subject of Debussy’s 1913 score for the Ballet Russes — a love triangle on a tennis court — hardly prepares the listener for the energy and endless invention of this densely textured seventeen minutes of music; from the first bars of its silken introduction, Tilson Thomas elicited its beauties, its turbulence, and its astonishing moments of clarity in a splendid performance. Everything — the swelling string parts, the subtle shadings from woodwinds and brass, the radical dissonances and remarkably forward-thinking rhythms — registered in abundant detail.

From the first bars of its silken introduction, Tilson Thomas elicited its beauties, its turbulence, and its astonishing moments of clarity in a splendid performance.

Thomas resists the temptation to overdramatize Debussy, and La mer, performed at the other end of the program, was admirable for its restraint. The conductor savors the work’s formal structure, summoning each section of the score in massive blocks of sound; the shimmering violins seemed to breathe organically, and the cellos played with magnificent poise and weight. The alert brass statements, and the silvery contributions from the woodwinds, were exemplary.

Still, it was Fleming’s night, and the soprano, appearing as part of the Symphony’s Project San Francisco, rose to the occasion with effortless charisma and ravishing vocalism. Critics in recent seasons have wondered if the soprano’s vocal power is waning, but this was a performance to suggest otherwise: her lyric instrument sounded in top form — soft as buttercream in its lower register, lithe and crystalline at the top — and she imparted an enchanting blend of sensuality, languor and tristesse to these fragrant French works.

Looking decidedly glamorous in a cerise gown and matching wrap, Fleming captivated from the first phrases of “C’est l’exstase.” Debussy’s settings of texts by Paul Verlaine, originally composed for piano and voice, are richly expanded in Holloway’s new orchestrations, and Fleming caressed the musical line and delivered the texts — a phrase describing the heart weeping like rain over the town, for instance, or the sound of a brook rolling over a bed of pebbles — in purely sensory terms. So it went through these seven lovely songs: “Green,” melding word painting and musical line, was sublime; “Mandoline,” which ended the set, was nothing short of intoxicating. If Debussy’s settings take you right to the gate of Verlaine’s Romantic world, Holloway’s orchestrations usher you in, linking the songs, illuminating the view and affording the soloist a spacious backdrop. Thomas conducted sensitively, and the orchestra played with verve and pinpoint dynamics.

After intermission, Fleming returned to sing three songs from Chants d’Auvergne — “La delaissado,” in its first San Francisco Symphony performance, followed by “Malurous qu’o uno fenno” and “Bailero” — and the results were just as arresting. Once again, the orchestra performed with flair — the haunting solo by principal oboist William Bennett was outstanding. And Fleming, rising to an exquisitely floated top note at the end, sounded ravishing.

Here’s more good news: Fleming will return to Davies Hall next week, in a duo recital with mezzo-soprano Susan Graham. Accompanied by pianist Bradley Moore, the program is all-French, featuring works by Saint-Saens, Faure, and — in case audiences didn’t get enough this week — more music by Debussy.