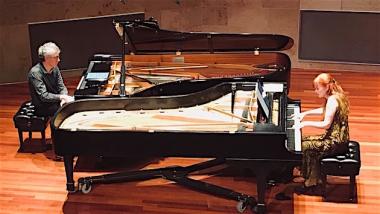 It’s banal to say that life has weird ways of mixing burdens with blessings. Less commonly, a staunchly devout French composer named Olivier Messiaen fueled some of his most extraordinary work with this profoundly human cocktail that — strangely and simultaneously — tastes both bitter and sweet.

After composing his now-renowned Quatuor pour la fin du temps (Quartet for the End of Time) as a soldier in a POW camp during WWII, using the unusual (but only) orchestration he had on hand — clarinet, violin, cello, piano — he returned as a civilian to a German-occupied Paris. At the same time, he joined the faculty at the local Conservatoire. There, he met a brilliant young pianist, Yvonne Loriod, who eventually married him.

Messiaen wrote his massive Visions de l’Amen to play together with Loriod on two pianos. On Monday evening at San Francisco Conservatory of Music, Left Coast Chamber Ensemble presented two pianists sufficiently courageous to perform this work, which is as glorious as it is intimidating: Eric Zivian, and a Bay-Area-based gem, Sarah Cahill. Left Coast also endowed two young composers — both doctoral candidates at UC Davis — to write brief pieces for the same instrumentation and inspired by Messiaen’s Visions. Zivian and Cahill did Messiaen’s masterwork far more than justice, just as emerging composers Chris Castro and Phil Acimovic represented the composition program at Davis far more than well.

To explain his Visions, Messiaen wrote about multiple definitions of what “Amen” might mean. These various meanings loosely inspire his seven-movement piece. A little like these multiple meanings, the short pieces by Castro and Acimovic appealed to different aspects of Messiaen’s idiosyncratic compositional style.

Castro explained that, for him, Messiaen’s music can be overwhelming, but also exudes distilled “moments of clarity.” Castro based his IV-I largely on this latter idea. Whereas Messiaen had tons of thoughts about the meaning of “Amen,” Castro explained that he mostly associates the word with the “plagal” or “Amen” cadence (hence the title of his piece.). Everyone who has sung “Amen” in most any Christian church understands what this means, and Castro played with the idea of this simple chord progression throughout his piece. On my first listen, I would describe his IV-I almost as a Rondo based upon a repeating melody and varying chorale idea.

Acimovic describes his Reverent Murmurs as a “quiet prelude” to Messiaen’s massive piece. While this brief piece wasn’t actually always quiet, it was consistently — and in tune with the centuries-long history of character pieces — atmospheric, inquisitive, and interesting. Acimovic practices Javanese gamelan. Perhaps informed by that tradition, calm, quiet confidence characterized this piece.

For Messiaen’s Visions, I was grateful to be sitting in the balcony, because it enabled me to look down on two superhero pianists like the omniscient god in whom Messiaen believed. According to the program notes, this piece is unified by a “Creation Theme.” While I’ve heard this piece before and I understand abstractly what this theme is, hearing and watching Zivian and Cahill live was both magical and mesmerizing.

It also revealed some humanizing strain. For example, the pianists weren’t magicians with perfect memories; instead, they used iPads whose screens they turned themselves. And from above, the two grand pianos look like an imperfect Yin-Yang symbol, which seemed especially fitting with Messiaen and Loriod on the brain.

Monday’s performance of this intense piece had too many shout-out qualities to name them all: the intensity of Messiaen’s piece, Cahill everywhere but especially at the start of the second movement, the singular intensity of both the duo and the audience throughout a sans-intermission program.

While it’s admittedly hard to describe — and amid life’s inevitable mix of burdens and blessings — Left Coast’s Monday offering leaned heavily toward the latter.

An Interview With Sarah Cahill