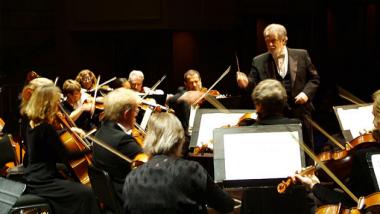 Despite the declining physical mobility of its founder, artistic director and main inspiration, George Cleve, the Midsummer Mozart Festival — reportedly the only one in North America dedicated exclusively to the eternally youthful music of the composer — isn’t showing its age.

The festival, a dependable part of the Bay Area’s musical summer menu for the past four decades, started its 41st season last weekend with concerts in Stanford, San Francisco, and Berkeley.

Unencumbered by his seated position and musically as agile as ever, Cleve gave the concert a dynamic start with his lively approach to The Impresario. But where the maestro really showed his affinity for the repertoire, his attention to detail and his caring rapport with the orchestra, was in the “Jupiter”, Mozart’s last symphony (1788).

As a conductor and artistic director of the Midsummer Mozart Festival, Maestro Cleve casts a big shadow, and assistant conductor Florin Parvulescu took on the somewhat ungrateful task of replacing him in the center part of the program, which included the Oboe Concerto in C Major, the Horn Concerto no. 2, and two arias.

Parvulescu largely kept in the background and chose to simply take care of business as the intermediary between soloists and orchestra — and he did so efficiently and with verve.

Orchestra members Laura Griffiths (oboe) and Glen Swarts (French horn) were generally at the top of their game in their respective solo concertos. Griffiths’ oboe was especially captivating in the inspired cadenza of the central slow movement, while Swarts’ equally colorful performance showed him at his best in the Rondo-finale of the horn concerto.

Soprano Christina Major was absolutely lovely in the concert aria "Nehmt meinen Dank," K. 383, but she outdid herself when she sang the heavenly aria "Non più di fiore" from the opera La Clemenza di Tito, K. 621, with nimble accompaniment by Natalie Parker on the basset horn.