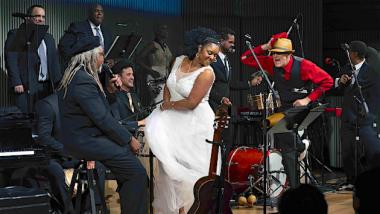 Get on Your Feet With the Afro-Cuban All Stars

Absolutely Live, like many of the terms applying to their multiple musical genres, has several meanings for the Afro-Cuban All Stars, who had cheering audiences up and dancing all weekend in SFJAZZ’s Miner Auditorium. It’s the title of the 14-member ensemble’s latest two self-produced albums, it’s the best way to experience what’s on those albums, and it’s the feeling they inspire in listeners on record and in person, an infectious vitality strong enough to sunder any sort of blockade, political or psychological, and to sustain attention without need of intermission.

First formed in 1996, when leader Juan de Marcos González was also serving as A&R consultant on Ry Cooder’s epochal Buena Vista Social Club recording (for Elektra’s World Circuit label), the group showcases similar traditional Cuban instrumental and dance genres, while evolving their repertoire towards the island nation’s more recent jazz- and rock-influenced musical forms. Accordingly, their set list (as experienced by this reviewer on Thursday evening) included a majority of González’s original compositions, several from the repertoire of the Buena Vista ensemble (then older musicians, many of who have since passed on), and several traditional tunes.

The opening invocation to “Oshun,” the patron (or matron?) saint of Cuba within the Yoruban/Nigerian-based syncretic Santería religion, introduced the ensemble through unison vocal lines, instrumental solos, and sectional shout-outs from the trumpet-flugelhorn section, positioned at the rear of the engagingly crowded stage. Most of the male musicians were handsomely attired in suits and ties, with an occasional fedora or beret, the women resplendent in billowing white dresses. González, one of several multi-instrumentalists, played güiro (an indigenous scraper) and used athletic arm and hand gestures to lead his group.

“Barbaridad” was one of several examples of son, the archetypal Creole Cuban song form, though contemporized here with some voicings from jazz. Emilio Suárez sang the lyric in an affecting but not affected soft tenor, underscored in part on vibraphone by González’s daughter Gliceria González (also a keyboardist for the All Stars and a student of classical piano and conducting). Compared with what came later, this seemed like an easy listening approach to Cuba.

The female in the title of “Ella y Yo” was González’s wife, Gliceria Abreu, positioned in the back line of the band as percussionist. Described by the bandleader as a traditional criolla (Creole) number based in the contradanza, dating back to 18th-century Europe, the piece showcased the montuno, a repeated figure over which singers and/or instrumentalists can improvise. González himself vocalized the musical dedication (all lyrics were Spanish) in a sweet baritone, and here, as in much of the program, the African-based call-and-response pattern positioned lead vocals against a coro (chorus) comprised of the massed voices of most of the rest of the ensemble. The packed house, mostly white, were beginning to move rhythmically in their seats.

A different montuno (SFJAZZ Director of Education Rebeca Mauleón has written a musical textbook setting forth 101 of them, and that’s only a fraction of the whole) underpinned “Altosongo,” a son whose lyrics follow a ten-line octosyllabic poetic form called décima, in which González and Suárez shared what seemed like an on-the-street musicalized exchange. González encouraged the audience to sound out the characteristic three-clap/two-clap cross-rhythm (think of “America” from West Side Story, keeping in mind that Puerto Rico shares much musical culture with Cuba). Orlando Cardoso interpolated a clarion line on piano, never expanding in his solos towards the labyrinthine complexity of fellow countryman and pianist and SFJAZZ Resident Artistic Director Chucho Valdés.

“Habana del Este” was announced (in English) by González, who’d taken up his tres (with three pairs of strings tuned differently from the guitar, which it resembles), as another song “written for this beautiful black lady, my wife.” This was a danzón, the elegantly lovely Cuban national dance in rondo form. In a manner distinguished from extended soloing favored in jazz, flugelhornist Tony Perigo traded brief but artful and engaging solos with clarinetist Laura Lydia González (the bandleader’s youngest daughter, who also played bass clarinet on other numbers; the band also includes two of her male cousins). In an audience heart-throbber, Laura and Gliceria’s mother came forward to dance with their father.

The younger sister was name-checked in “Laura en el Paraiso,” a more contemporary exemplar of Afro-Cuban jazz, with smart longer solos on piano, vibraphone, and “baby” bass (Alberto Pantaleon) and a sizzling exchange between Tany Allende on congas and Caleb Michel on timbales, working the sexy polyrhythmic complexity characteristic of the music of Cuba and Puerto Rico.

For the next number, González implored the SFJAZZ crowd, unused to such things but by now at his beck and call, to rise from their seats and dance to a son montuno titled “Pío Mentiroso.” The infectious rhythm and spirit and the appreciative smiles of the musicians, and González and Suárez’s emergence from the stage to wander the aisles, effectively morphed what had been a concert into a party where all attendees, including your reviewer, were now part of the entertainment, disabused of the traditional fourth wall between performers and audience. They stayed erect and kinetic for another son, “Cada Vez Que Te Veo,” and then relaxed back in their seats for “Homenaje a Puerto Rico,” a plena in the triste folkloric form of the coastal regions of that beleaguered U.S. territory.

After the ensemble’s exit, a rousing standing ovation gratefully brought back to the stage conguero Allende, who sat for a prolonged pyrotechnic solo, invoking the return of the rest of the group and a gala encore, “María Caracoles.” Conceived in the Mozambique style and melding dance steps from Cuban rumba and American twist, the song’s lyric was started here by González, with Cardoso executing rhythmic contortions on piano. The pianist then rose to display an eye-and-ear-catching rumba with the elder González sister. For this showy show-ender, the brass blazed while lead singers and coro shared a last back-and-forth with the title name and the audience massed a wave, as impressive in supportive spirit as the baseball fans at Oracle Park. It was a win-win for everybody.