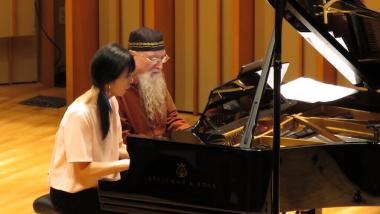 Back on Sept. 19, 1995, Gloria Cheng performed her first Piano Spheres recital, in which she performed the West Coast premiere of Terry Riley’s supremely beautiful The Heaven Ladder, Book 7. Since then, she’s become a mainstay of the Los Angeles series.

Tuesday at the Colburn School’s Zipper Hall, Cheng reprised The Heaven Ladder as part of a Piano Spheres concert devoted entirely to Riley. But what made the concert particularly appealing was that Cheng and Riley, like a musical tag team, shared the stage, concluding with the world premiere of Cheng Tiger Growl Roar, with the pair performing side-by-side.

Terry Riley will always be known for his 1964 minimalist creation, In C. But, as this recital demonstrated, trying to pigeonhole his music is a fool’s errand. The influences that find their way into his piano music can include the rhythmic, pulse-driven patterning of minimalism; free-flowing flights of jazz improvisation; the microtonal structures of North Indian raga singing; the impressionism of Debussy; and the ragtime stride piano style of Fats Waller.

At their best, Riley’s piano works combine brilliant virtuosity and clarity. At other times the structure can wander among influences. Cheng’s program included a rare performance of Two Pieces for Piano (1958–59), an early flirtation with the music of Arnold Schoenberg. The piece, Riley writes, represents a time when “I had begun to transition from my neoclassical period under the influence of Francis Poulenc and Darius Milhaud. The discovery of Schoenberg excited me both as a piano player and a composer.”

While the piece avoids tone rows, Schoenberg’s influence is apparent in the detailed construction and connection of carefully clustered phrases and their spare connecting lines. The architecture is precise, and Cheng played with exacting rigor.

Stylistically, they seemed a world apart from the free-flowing style of  The Walrus in Memoriam (1993), with its vaguely apparent Beatles inspiration and nod to Scott Joplin’s piano rags.

As Riley became more and more involved with electronic keyboards and tape manipulation (A Rainbow in Curved Air) and began to work extensively with the Kronos Quartet (Cadenza on the Night Plain), his notated work for piano took a 35-year hiatus.

The five sections of The Heaven Ladder, Book 7 are statements unto themselves, like individually illuminated short stories. They reference different styles and influences within the central movement, “Ragtempus Fugatis” serving as a capstone. The way Riley describes them, each section is meant to “bathe fully in the kind of sensuality each one is characterized by.” And that is certainly the quality Cheng brought to her performance.

The key to Cheng’s artistry is a remarkable combination of melodic grace, specificity of attack, and a delineation of rhythmic structure. Her performance of The Heaven Ladder was, by turns, romantic, precise, and free-flowing.

After Cheng’s performances, it was fascinating to hear Riley play his own works, Simply M (2007) and Requiem for Wally (1997). The former Riley dedicated to his mentor/guru Pandit Pran Nath on the centenary of his birth. It began and ended with Riley playing and singing in the North Indian raga style with a major section of structure and improvisation in the middle. The sung sections demonstrated Riley’s devotion to the raga.

It’s rare to hear two musicians of decidedly different temperaments playing together. Riley’s style, while virtuosic, is open and often playful. Cheng is the master of exactitude. So, when they gathered together for the final piece, the premiere of Cheng Tiger Growl Roar, Riley said, “We’re not sure what we’re doing” as they sat down to perform. What followed was a playful combination of Cheng interpreting a notated score while Riley improvised off it. Halfway through, the two switched sides: Riley took the high notes and Cheng took the low notes.

One of the least noted, but potentially most exciting, upcoming Bay Area premieres is the Calder Quartet introducing Christopher Rouse's third string quartet at Stanford Lively Arts on Wednesday.

The quartet is celebrating its long relationship with the composer by curating a festival with his most significant and rarely-performed works, plus several world premieres composed in his honor.